The equestrian sport has many faces, it tells exciting stories and it can be incredibly emotional. The award ceremony of the “Silver Camera”, which is conferred to the best equestrian photo of the year, demonstrated this once again on Saturday evening.

114 photographs were submitted, but of course only one of them could win. “The quality of the photos is super. The decision wasn’t easy,” stated Show Director of the CHIO Aachen, Frank Kemperman, who selected the winner and runners-up together with last year’s winner Terri Miller (USA), Andreas Müller (Managing Director, Medienhaus Aachen) and the dressage Olympic gold medallist, Jessica von Bredow-Werndl. The entry submitted by Diana Wahl convinced the star-studded jury. Her photo, which had captured an exceptional moment at the exit of the Main Stadium in Aachen, particularly stood out from the entries because of its perfect interplay between emotions and technology. Second place went to the photographer from Aachen, Andreas Steindl and his driving sport motif that impressed with its unique play of light. The animal and portrait photographer, Franziska Sack, who again and again succeeds in capturing eternal memories with her camera, was delighted to win the prize for third place.

The “Silver Camera“ is organised by the Aachen-Laurensberger Rennverein and was initiated by the artist, Wolfgang Lamché. The awards were presented on Saturday evening by Dr. Thomas Förl, board member of the ALRV Supervisory Board. First place is endowed with 2,500 Euros in prize-money, second place receives 1,000 Euros and third place 500 Euros. 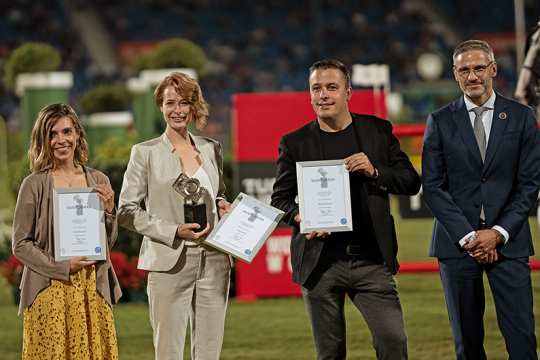