DHL Prize goes to Krajewski after a roller-coaster of emotions, New Zealand take the team victory

After the first two competitions in the DHL Prize, of the Eventing Nations Cup at the CHIO Aachen, all signs indicated that it was going to be a success across the board for Germany. However, today’s cross-country course brought several surprises with it – especially for Julia Krajewski.

Before the cross, Julia Krajewski was at the top of the rankings in the individual classification with both horses and was in the lead with the team in the Nations Cup. The national coach of the German Youngsters had to set off on the track with her team horse first, the four-star winner Samourai du Thot, who was lying in second place in the individual classification at the time. He mastered the first obstacles of the cross-country course without any difficulty. Then all of a sudden at obstacle 16a of the SAP Complex the journey was over. Sam ran out – not once, not twice, but indeed three times. “I don’t know what happened,” said a clueless Krajewski. “He is very intelligent and if he wants to do something he does it. I have to have him one hundred percent on my side.” Wasn’t that the case today? “I had a very good feeling when I set off, but somehow or other we lost each other en route. We will analyse what happened afterwards.”

For the German team, Sam’s elimination was bitter. And as Julia Krajewski explained later: “Then, we had bad luck on top of the misfortune.” Because Kai Rüder’s Colani Sunrise refused to leave the start box for 40 whole seconds, last year’s winning pair Ingrid Klimke and SAP Hale Bob OLD also had a run-out on the first element of obstacle 16 and Andreas Dibowski had a disastrous ride in the jumping yesterday. The team ultimately finished fifth.

The Nations Cup went to the team from New Zealand comprising of Tim Price with Cekatinka, who also came third in the individual classification, Clarke Johnstone with Balmoral Sensation, Sir Mark Todd with Kiltubrid Rhapsody and Blyth Tait with Havanna, ahead of the teams from France and Sweden.

The two-time Olympic individual gold medallist, Mark Todd, summed up his impression of the course after his ride as follows: “It is a difficult course to go fast. There might be 1 or 2 riders who stay in the time. My horse jumped very well. It is a tricky course with difficult jumping efforts, it is twisty, up and down. But the going is absolutely perfect, the cut grass makes the horses want to jump. A big compliment to the organisers.“

Mark Todd’s estimation of how many riders would stay in the time proved to be very precise. Only one rider succeeded in reaching the finish line clear within the time: the Australian Christopher Burton with the Oldenburg-bred mare, Quality Purdey. After the dressage and jumping the two of them ranked fifth, but thanks to their clear round in the cross-country, they worked their way up to second place. Burton: “My horse did a super job. I simply love her.“ He too confirmed that obstacle 16a was the most difficult fence. But hats off to Rüdiger Schwarz he is a brilliant course designer.“

The reason why Julia Krajewski’s day not only brought a lot of frustration, but plenty of joy too, is called Chipmunk – a ten-year-old Hanoverian-bred horse. The gelding has claimed three victories in four competitions in 2018 (all at three-star level) as well as a second place. The third victory came today. For his rider the first challenge involved putting the disappointment with Samourai du Thot behind her so she could concentrate on her next ride. “I know that they are both totally different and just because it didn’t work out with the one, that doesn’t mean I wouldn’t be successful with the other one,” was what she was considering before she set off with Chipmunk. What are Chipmunk’s qualities? “He simply always wants to do everything right. He is a very honest, genuine horse. His attitude is as if he wants to say, ‘Let’s go, let me do everything, all is well!’” But Krajewski was aware before the start, that Chipmunk had never jumped such a technical and challenging course before. Nevertheless “Chip” proved once again that one can rely on him. And after he headed for the last obstacles in the Main Stadium after a solid round, 25,000 people cheered him and his rider enthusiastically. It was extremely touching. Especially after experiencing such a roller-coaster of emotions. “I definitely needed the lap of honour to get myself together again,” stated Krajewski. “It is absolutely fantastic cantering into the stadium here and being carried by the crowd and feeling that he would do anything for me…”

Chipmunk wasn’t quite inside the time. But after a super dressage test, the pair had such a big lead in the individual classification that they secured the victory on a score of 26.10 minus points. Chris Burton finished the overall competitions with Quality Purdey on his dressage result of 26.70 minus points. Tim Price ranked third with Cekatinka on a score of 30.30 minus points. 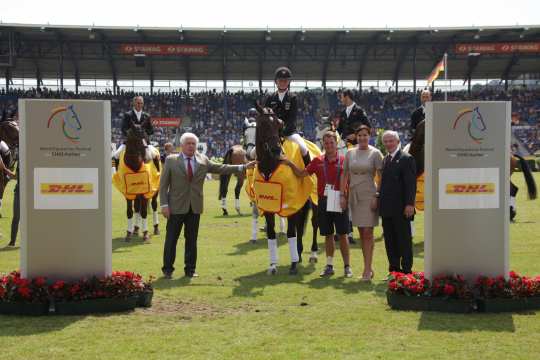