“The Silver Horse” goes to the editorial team of sportschau.de 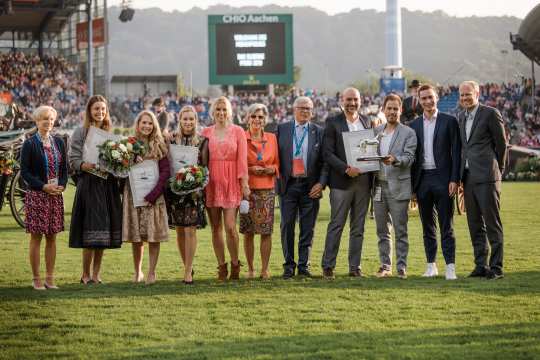 “The Silver Horse” goes to the editorial team of sportschau.de

When people think about the Sportschau, the first thing that springs to mind is the football results at 6 p.m. on Saturday evening. However, the Sportschau, which is produced by WDR, is more. Much more. And it has long since also been digital. The sportschau.de team is also doing extensive coverage on what is going on at the CHIO Aachen 2019, on the website and in the social media. And because the team does this in such an outstanding way, the jury of the online award “The Silver Horse” has now paid tribute to this commitment. More than 40 journalists and onliners, social media stars and media companies had submitted their entries for the award.

In addition to the team of sportschau.de, which won the prize with its overall concept “CHIO Aachen 2018”, second place went to Saskia Meyer-Hellwig for her overall concept “BinieBo”, Franziska Gerber and Kristin Rösch claimed third place for their podcast “Neunkommanull” (nine point zero).

The jury, comprising of the dressage rider Nadine Capellmann (whose father Kurt Capellmann originally initiated based on the proposal by Count Leopold von Rothkirch und Trach), Ute Gräfin Rothkirch and Wolfgang Brinkmann (both from the German Riding and Driving Association), the YouTuber Annica Hansen and Michael Mronz (CHIO Aachen), was impressed by the diversity of the submitted entries. Blogs and social media platforms were among them alongside classic media that have mastered the transformation into the digital world in a wide range of ways.

For example, the editorial team of sportschau.de uses the communication channels that the “new” media offer, comprehensively and at the highest level possible. The website sportschau.de is the central element here. Links to the social media clips can be found here as well as short interviews, 360 degree or multimedia reports. Informative, entertaining and top level – that was the jury’s assessment of the sportschau.de concept. Saskia Meyer-Hellwig has been one of the most famous personalities on the equestrian sport influencer scene for three years. In the scope of “Biniebo”, she allows her followers to take part in her life with and sometimes without horses via the platforms YouTube, Instagram, Facebook, Snapchat and her website. Indeed in such a professional manner, that the jury placed her second. In the meantime, she has even taken part in international jumping competitions as an amateur. The podcast “Neunkommanull” by Kristin Rösch and Franziska Gerber stands for brilliant entertainment. In a totally charming, amusing and informative manner, the two friends chat about horses, the sport and everything else possible. What comes across as being so relaxed and casual, is excellently prepared evidently thanks to Rösch’s journalist background.

For the past two years, the traditional Award has no longer been conferred in the Print, TV and Radio sections as was the case for the 30 years previous to that, but instead pays tribute to the changing media landscape. The award ceremony for the winners took place amid an exceptional setting: During the Opening Ceremony of the CHIO Aachen 2019. The Prize is jointly organised by the German Riding & Driving Association (DRFV), the Aachen-Laurensberger Rennverein e.V. (ALRV) as well as Gina Capellmann-Lütkemeier and Nadine Capellmann.