In 2018, Daniel Deußer’s, Killer Queen VDM, was successful in the Sparkassen-Youngsters-Cup, now she already claimed the victory in one of the most important competitions of the CHIO weekend, the RWE Prize of North Rhine-Westphalia.

Nine-years-old, the most successful horse in the Sparkassen-Youngsters-Cup 2018, victorious in a jumping competition in the 4* Tour at the Hamburg Derby and now also in the RWE Prize of North Rhine-Westphalia at the CHIO Aachen in 2019 – Daniel Deußer’s Killer Queen VDM by Eldorado v. Zeshoek is something like a four-legged wonder child. “I always knew she is a horse for the Big Tours. I am glad that the results are already starting to reflect this!”

In a time of 44.65 seconds, Killer Queen crossed the finish line in the fastest time in the second round, which meant he took a second off the time of Olivier Philippaerts and the very experienced Cue Channa, whom Malin Baryard-Johnsson competed at the Olympic Games with in Rio in 2016 and who was also a member of the Swedish squad that won team silver in 2017, (0/45.79). Third place went to the overjoyed Luciana Diniz with her new crack, Vertigo du Desert, whom she has been jumping from top result to top result with since March (0/46.42).

In the presence of NRW Minister President, Armin Laschet, Daniel Deußer and Killer Queen demonstrated how the course of Frank Rothenberger could be mastered best. Some of the other riders got into trouble along the way, particularly at the open water jump. This is where André Thieme and his just nine-year-old mare, Crazy Girl, took a fall, which looked quite bad at first, but fortunately both horse and rider didn’t sustain any serious injuries. Crazy Girl had a gash on her left front leg that was treated in the veterinary clinic on the showgrounds. Philipp Weishaupt and his mare Che Fantastica, went their separate ways without the water being involved. The mare’s bit snapped, so Philipp Weishaupt couldn’t steer her and he had to jump off. He landed rather unfortunately on his coccyx, but was able to leave the course on foot. Che Fantastica sustained no injuries.

Deußer is now in the favourable position to have qualified three horses for the Rolex Grand Prix on Sunday: Killer Queen, Calisto Blue, the horse he claimed second place with in the Nations Cup yesterday and Tobago, whom he came third with on Wednesday in the Turkish Airlines-Prize of Europe. However, he has already decided who he will saddle: Tobago Z. 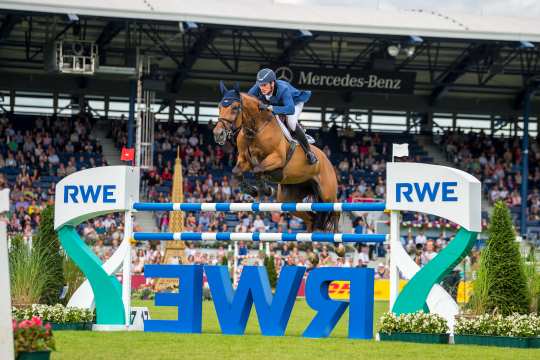