The motto “La vie est belle” already said it all: Life is beautiful, especially at the “Horse & Symphony” concert, this unique combination between equestrian sport, dance, acrobatics and of course the impressive live music of the Aachen Symphony Orchestra. For the first time under the direction of the General Music Director, Christopher Ward.

It was a fascinating duel between the directors when Jean-François Pignon met up with Christopher Ward in the Deutsche Bank Stadium. Pignon is without doubt the undisputed master of liberty dressage. He doesn’t need a saddle or bridle. Instead he guides his nine horse through the arena using but a few gestures, as if by magic. And whilst Pignon excelled at the “Horse & Symphony” for the second time already, the new General Music Director of the Aachen Theatre, Christopher Ward, celebrated his premiere! He too only needed a few movements to coax the mystical sounds of the second movement of César Franck’s “Symphony in D minor” from his orchestra on the stage during this last show act, the grand finale. A perfect interplay, which was rewarded with enthusiastic applause. This performance was without question one of the highlights of the 16th edition of “Horse & Symphony”, which in 2019 was incidentally strongly characterised by this year’s partner country France. An Eiffel Tower “en miniature” located next to the dressage arena already gave that away.

The “Tour de France” comprising of around 120 performers, 70 musicians and approx. 80 horses got underway in the South of France. The riders of the Grand Stables of Chantilly in their costumes decorated with flowers and dancers from the “Ferberberg Natalie Jungschlaeger Ballet” brought the carnival from Nice to Aachen to the melody of Emile Waldteufel’s waltz, “The Ice Skaters”. Fast-paced action was on the agenda next: The pony show team under the direction of Anja Mertens presented a sporty programme. The motto: Allez, hop! When the theme is focusing on the “horse nation” France, of course the beautiful Camargue horses can’t be missing. At Horse & Symphony, the herdsman Renaud Vinuesa and his companions presented wonderful mares and foals from this very special region. This rather quiet performance to Georges Bizet’s “L’Arlesienne” was followed by the musical forge, which equipped with a hammer and anvil, gave a powerful rendition of Josef Strauss’ French polka “Fireproof” accompanied by the Aachen Symphony Orchestra. The vaulters also conquered the “manège” on this evening: Aspiring young talents of the vaulting club, Köln-Dünnwald, gave an impressive acrobatic performance on the horseback to Jules Massenet’s “Méditation from the Opera Thaïs” including a violin solo.

If a prize had been awarded for the cutest performance of the evening, it would no doubt have gone to the French show star, Mélie Philippot and her Breton horse, “Quizas”, who weighs 1,000 kilogrammes and the Shetland Pony “Diego” who weighs in at a mere 98 kilogrammes. The unlikely pair performed an exceptional “pas de deux”, which above all revealed one thing: In spite of them belonging to different weight classes they are indeed a well-coordinated team! They were accompanied by the mezzo-soprano, Fanny Lustaud.

The second part after the break kicked off with a German dressage rider, who knows the Deutsche Bank Stadium like the back of her own hand: Helen Langehanenberg. She has not only already succeeded in winning the famous Deutsche Bank Prize in Aachen twice already, she has impressed the crowd at the “Horse & Symphony” concert before too, namely in the year 2013. She now made her comeback as the fiery Carmen to the most famous melodies of Georges Bizet’s opera of the same name. She ensured the spectators goose bumps moments! The melody of the “CanCan” from Jacques Offenbach’s “Orpheus in the Underworld” is at least as famous. In Aachen the music was accompanied by ten nimble Icelandic Horses and 26 dancers from the “Ferberberg Natalie Jungschlaeger Ballet”. A unique show act – also thanks to the outstanding light technology, which highlighted all of the performances.

Subsequently the Grand Stables of Chantilly once again provided fantastic, poetic moments with one of their most renowned showpieces: The sun. Based on the French fairy-tale “Peau d’âne”, which means donkey’s skin in English. The “Children of the Moon”, more commonly known as  “Hijo de la luna” of the Spanish band, Mecano, followed the sun. Three performers from the Berlin Aerial Dancing Theatre “floated” around the rider, Britta Rasche-Merkt. One of many magical moments during this year’s edition of “Horse & Symphony”. The evening was hosted by Volker Raulf and Pia-Rabea Vornholt, Music Dramaturge at the Aachen Theatre.

Once again this year part of the entrance fees went in aid of a charity. Carl Meulenbergh, President of the Aachen-Laurensberger Rennverein e.V., will be presenting a donation cheque for 12,000 Euros to the Aachen-based charity, “Kinderseele e.V.” (Children’s souls) this evening during the second “Horse & Symphony” concert. 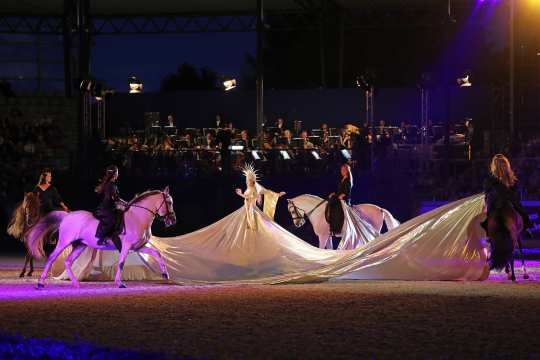