“Clear the ring” for the show of the year

When outstanding live music meets a breath-taking show, then it is time for the “Horse and Symphony” at the CHIO Aachen. This year, the popular format is going to be imaginative, colourful and spectacular: Because on the evenings of June 24th and 25th, 2022, the guests will be invited “to walk right in” to the Deutsche Bank Stadium to experience the fabulous world of the circus.

The Deutsche Bank Stadium is swathed in the scent of popcorn and candy floss, the riding arena has been transformed into a circus ring, the audience is whisked off into an imaginary world full of fun and spontaneity. A world in which selected equestrian athletes, show stars and acrobats will come together with over 50 horses and the majestic live music of the Aachen Symphony Orchestra to produce a sonorous occasion full of surprises.

First of foremost, the fairy-tale like parade of the street theatre “FierS à Cheval” will honour the crowd with their appearance, conjuring up a fantastic pageant with artistically created formations in the sand with their over-dimensional horse figures comprising of light, air and transparent fabrics. On both evenings they will be joined by “Fumagalli”, the probably most popular clown of this day and age. He will perform together with his brother, Daris – distinguished with the Golden Clown in Monte Carlo – the duo is a worldwide attraction.

Further highlights of the colourful programme include the “Air Dance Theatre” of Nadja Meinhardt, who unites dancing and artistic skills with lyrical elements and who particularly impresses with her aerial acrobatics as well as the “Madness Brothers”. The show performance of the mini trampoline show group will be enhanced by a fast-paced carriage quadrille under the direction of Andreas Wintgens.

These and of course many other magical acts will be accompanied by the live music of the Aachen Symphony Orchestra, which will perform several of the most popular melodies from the history of the circus. Christopher Ward, General Music Direktor of the City of Aachen, will conduct the orchestra on both evenings, on June 24th and 25th. The first note of the extremely popular format, which has been a fixed item of the agenda of the World Equestrian Festival since 2003, will be conducted by the musician from London at 8.30 p.m. respectively. The event is going to be staged in 2022 more opulently than ever before. Tickets are available online and from the telephone hotline (+49-(0)241-917-1111). Walk right in! 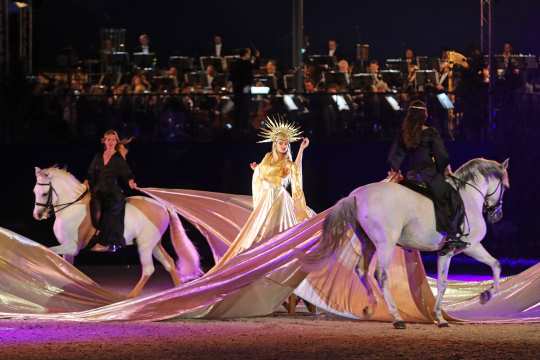