The hunting competition over ditches and banks, the Prize of Sparkasse, is one of those special classes that makes the World Equestrian Festival, CHIO Aachen, so unique. In 2017, the winner comes from a country where hunting has a long tradition, namely Cian O‘Connor comes from Ireland.

O’Connor explained that he had already won this class “four or five times”, he couldn’t remember exactly. But one thing he knew for sure: “I love this type of traditional competition with natural obstacles. And the crowd find it super too. That is important! All of this is what turns Aachen into the without doubt best show in the world!”

His partner in success today was the 12-year-old Swiss-bred Conteur son, Copain du Perchet CH, a horse that Cian O‘Connor described as follows: “He likes jumping natural fences, but he can also compete in the Big Tour, he is a real all-rounder.” He added that the horse’s big advantage is his huge canter stride. “I can always do one stride less without him losing his balance.” That saves time. His best time today: 68.42 seconds.

Second place went to Philipp Rüping and Chalypsa, who jumped clear in a time of 68.70 seconds. The pair already won the Prize of Handwerk on Wednesday. Afterwards Rüping had explained that speed jumping was right up the street of the Mecklenburg-bred Chacco-Blue daughter. And he had been delighted to pick up a golden ribbon at his Aachen debut. Now he has a silver ribbon to go with it. 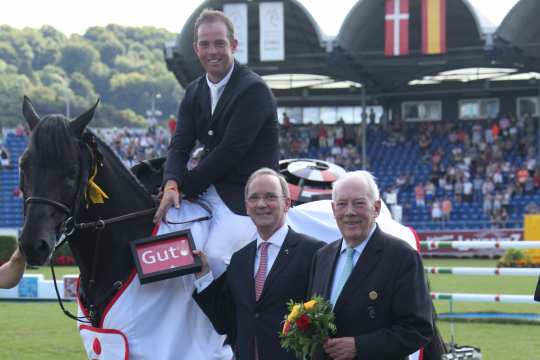