For 31 years, he has informed the crowd at the Aachen Soers from the judges Tower passionately and with expertise. Today, we will be hearing the voice of Christian Earl of Plettenberg from the last time in the Main Stadium during the Rolex Grand Prix.

Do you remember your first appearance at the CHIO Aachen?

Of course. It was in the year 1991. Commentating in this huge stadium in front of so many people was a nerve-wracking moment. And this positive excitement has remained until this very day. It is a very special feeling every day to return here, to take my seat in the Judges Tower on the first day and switch on the microphone.

What makes the CHIO Aachen so special?

It is the overall package: The stadiums, the atmosphere and an audience that is unique in the world in terms of inspirational enthusiasm. That was the case back then and it is still is today. Because in all the years that I have been on board, the Aachen-Laurensberger Rennverein has done one thing incredibly right. The show has taken the general developments of the sport into account and integrated these into its concept. There was and is no better event in our sport. This is also the reason why everyone who has anything to do with the equestrian sport dreams of riding in Aachen at least once in their life.

When did you notice that your voice is a special gift?

I don’t consider my voice to be a special talent, for me it is more like a fantastic gift. I have never found my voice anything special and it amazed me for a long time why so many people find what I do so good.

How did it come about that you started working as a commentator?

In my case it came about because I failed in a different area. It was always my major aim to compete in Aachen one day. But I didn’t succeed in doing so. After I had abandoned that hope at some point in time, several show organisers from shows that I previously used to ride at approached me and asked if I would like to work as a commentator. So, that’s what I did and gradually it progressed. In 1985, when Hans-Heinrich Isenbarth, my later mentor on the microphone and fatherly friend, heard that he showed me the ropes from then on. I learned a lot in that time and I am still extremely grateful to him for that and for the fact that it was through him that I ultimately came to Aachen.

How much preparation is involved in the task in the Judges Tower?

Hans Heinrich Isenbarth once told me: The secret of a good commentator is no less than perfect preparation. In my case, I initially filled out index carts, later a file so that I was always up-to-date. Gratefully prior to the CHIO Aachen, we commentators also receive a flood of information. That is also something that makes Aachen so unique. The background information we receive from the organisers, carries us commentators through the show.

Has anything ever gone wrong in spite of that?

Of course. Over the course of such a long time, situations have repeatedly arisen where one would have preferred not to have said something or would have said it differently in hindsight. But that isn’t often the case and it is to a certain extent what makes our responsible job so unique: We talk live and you can’t correct that afterwards.

Can you remember a special situation where you really had to improvise?

That what spices up the commentator’s charisma. Merely reading out names and results is not really difficult. But we also have to be able to react to unforeseeable situations ad hoc. That is what makes our task so exciting. We commentators are primarily responsible for the crowd. Even a storm, something we experience again and again from time to time in Aachen, can even be fun in the Judges Tower, if one manages to entertain the crowd during the interruption.

Which moment at the CHIO Aachen has moved you most?

There are moments every year that particularly move me. That might be the performances of younger, still inexperienced rider, who is making his debut here in Aachen and who puts in fantastic performances. The World Equestrian Games in Aachen in the year 2006 particularly spring to mind here. The atmosphere in the Main Stadium was unprecedented. I really struggled to keep my voice under control through to the last moments. It was very emotional.

There is of course going to be a CHIO Aachen next year. Will you be here?

Perhaps not on-site, but I will definitely follow what goes on in Aachen from a distance. I am now looking forward to being able to spend more time with my family and I look back on many exciting, moving moments, friendly encounters with wonderful people and unique horses with great gratitude. It was a lovely time. 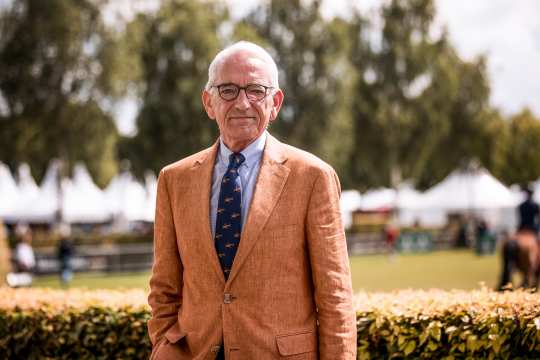 An interview with Jennifer Gates and Nayel Nassar: “Nothing compares to CHIO Aachen“Welcome to the club – Exclusive NFTs: The CHIO HORSESWhich way to Canada?Goodbye Kempi!Sensation in the Rolex Grand PrixVictory for Team Netherlands in the Boehringer Ingelheim Nations CupFast, faster, Wilm Vermeir in the Röwer & Rüb PrizeCathrine Dufour’s dream comes true in the Deutsche Bank PrizeSix horses + two riders + one driver = A fast-paced race in the CHIO Cup