Over the past years, SAP and the CHIO Aachen have jointly developed exciting and highly functional digital innovations, such as the meanwhile also internationally implemented “Judging App“.

The official technology sponsor of the CHIO Aachen will in future also be responsible for the ticket system of the major sporting event.

“Henceforth, thanks to SAP Event Ticketing, we have found an outstanding solution for the demands that the CHIO Aachen places,” explained Michael Mronz, General Manager of the Aachener Reitturnier GmbH. Since the World Equestrian Festival is an event that runs over ten show days with five different disciplines, with a wide range of supporting events and several venues. “We can accommodate the complexity of the event by implementing an easy-to-understand system that is intuitive to operate thanks to SAP Event Ticketing,” added Mronz, who expressed his extreme gratitude to the present ticket partner, CTS Eventim, for the excellent cooperation over the past six years.

The future system will be launched on Friday, July 14th, 2017, on the first show day of the CHIO Aachen 2017. That is when the advanced sales for the CHIO Aachen 2018 begin. Trusted additional functions such as the 3D application that allows the stadiums to be viewed in advance or an official ticket exchange will also be integrated into the SAP Event Ticketing system. 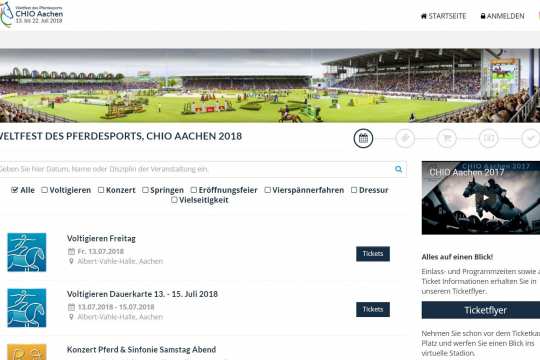