CHIO Aachen 365 days a year – that is the idea behind the CHIO Aachen CAMPUS. The infrastructure at the traditional showgrounds is to be used just as intensively as the existing know-how and the networks.

Divided up into themes, so-called “clusters”, the camp is to push the equestrian sport as a whole. There are going to be five such clusters: Excellence, Education, Youth, Training and Digital. The different fields make it clear that the focus not only lies on top sport, but also on digital further developments, innovations and new ideas, on education and on the promotion of youths and mass and amateur sports. “We will put the international charm of the CHIO Aachen to use here as well as the existing infrastructure, our know-how and our networks,” explained Stefan Knopp, Director of the CHIO Aachen CAMPUS.

The show-jumper Jos Lansink and the dressage superstar Isabell Werth have been won over as “Head Coaches” for the cluster Excellence. They will accompany top aspiring athletes on their way into the professional sport under the umbrella of the CHIO Aachen CAMPUS. This cluster addresses exceptional athletes, scholarships can also be awarded. The simplified meaning of training is to open up the showgrounds. Training days were repeatedly offered in the past, “we see how much the athletes’ eyes light up when they are allowed to compete here on these unique grounds,” commented Birgit Rosenberg, member of the board of the organisers, the Aachen-Laurensberger Rennverein (ALRV). Education encompasses numerous themes: “We are talking about a wide range of educational offers here,” stated Stefan Knopp. This could incorporate cooperations with universities or clubs as well as a photo workshop with the world’s best equestrian sport photographers.

The key idea of the Campus is the early involvement of the youth. The CHIO Aachen already commits itself strongly for the youth today: The “Aachen Youngstars” in the winter and the U25 competitions at the CHIO Aachen are presently the most important cornerstones. This commitment is to be further developed in the scope of the cluster Youth, through to a “CHIO Aachen Junior” staged parallel to the actual CHIO Aachen. The vision is clear: “The stars who we will experience at the CHIO Aachen in the future will be born in the CHIO Aachen CAMPUS,” said Michael Mronz, General Manager of the Aachener Reitturnier GmbH.

Innovations and digital developments are as equally important as the sport. “The camp is also and above all a digital laboratory,” reported Stefan Knopp. Together with partners such as SAP one intends to develop and push themes oneself, but also involve intelligent minds outside of Aachen – for example in a hackathon, in order to develop solutions for events. Its continual development as well as its courage to invest has always distinguished the CHIO Aachen,” stated Stefanie Peters, still designated ALRV President at the time of the presentation of the “CHIO Aachen CAMPUS”. In the evening the 47-year-old entrepreneur is to be elected President of the ALRV during the General Meeting. She added that the Campus is a fantastic, future-looking project and that what Angela Merkel once stated applies more than ever: The heart of the equestrian sport beats in Aachen. According to Peters, “It now beats 365 days a year thanks to the Campus.”

It is however also clear that “In order to achieve the goals, the further development of the showgrounds is elementary.” As already announced, the ALRV intends to use part of the site of the form police headquarters, discussions between the City of Aachen and the State of NRW regarding purchasing the site are already ongoing. The prerequisites for the Campus are top: “The showgrounds are unique across the globe, the CHIO Aachen is located in the centre of Europe geographically speaking, in the heart of the international equestrian sport,” noted Birgit Rosenberg. There is plenty of equestrian sport know-how in the surrounding area, which one intends to bundle into the offer, remarked the Director of the Sports Department. In this way, the grounds of the CHIO Aachen will turn into a place of exchange. According to Michael Mronz, the Campus is no less than a quantum leap in the history of the CHIO Aachen. 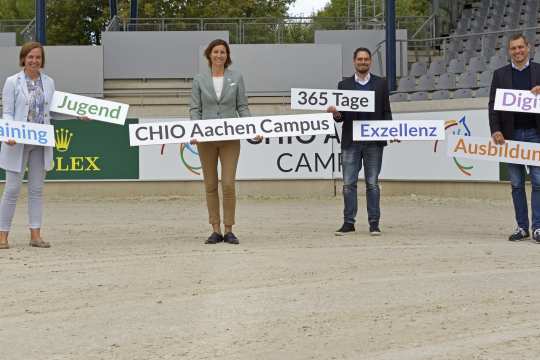