It is a good job that equestrian athletes aren’t football players, wimps, or pansies! Namely, this evening the Lavazza Prize turned into a water fight. And it was fantastic fun!

Six teams each comprising of an eventer, two show-jumping colleagues and a master at the long reins with a team of four horses in front of the carriage defied the weather conditions that Petrus confronted them with, caused more of a stir at the Soers than any storm possibly could. Among others, “Atemlos” by Helene Fischer was the fitting musical accompaniment. Whilst the riders and drivers demonstrated on the grass arena (which is not quite as immaculately green as before) that equestrian athletes are not just tougher than footballers, but at least as fit, the crowd rocked the stands!

The very international teams had top line-ups. In the end, Team 1 carried off the victory. Great Britain’s Alexander Bragg flew the flag for the eventers with Redpath Ransom. The rider from Chile, Samuel Parrot with Romance du Criolp and Italy’s Juan Carlos Garcia with Cocodrillo took over the part of the show-jumpers and the Hungarian driver, Jozsef Dobrovitz sped around the arena with his team of four horses: Baccara, Conversano XXVII-41, Incitato Szilaj and Indian. Their overall score was 197.5 seconds, which put Team 5 comprising of Ingrid Klimke/Parmenides, Mario Stevens/El Bandiata, Emanuele Gaudiano/Jasper and Georg von Stein into second place (202.47). Third place went to Team 3 with Michael Jung/Star Connection, Maurice Tebbel/Camilla PJ, Mathis Schwentker/Landprincess and Ijsbrand Chardon behind the carriage (206.07). 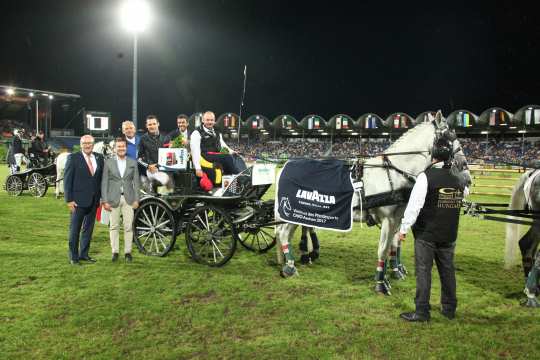