Carl Meulenbergh awarded the “Prize of the City of Aachen”

Two things happened 26 years ago: After becoming a member of the Supervisory Board, Carl Meulenbergh commenced his honorary commitment for the CHIO Aachen and the Mayor at that time, Dr. Jürgen Linden, awarded the Prize of the City of Aachen for the first time. At the CHIO Aachen 2021, everything came full circle because Carl Meulenbergh was presented with the Prize of the City of Aachen. This prize is conferred to personalities, who have rendered special services to the CHIO Aachen.

This particularly applies to Carl Meulenbergh, who, after having served in a wide range of honorary functions, most recently as the association’s President for ten years (2010 to 2020), upheld and still maintains close ties to the CHIO Aachen. The Mayoress of the City of Aachen, Sibylle Keupen, now honoured him for these exceptional services with a sculpture of draught horses created by Albert Sous. “Many thanks for your long-standing and exceptional commitment,” the Mayoress said during the award ceremony at the CHIO Aachen 2021. Stefanie Peters, who succeeded Meulenbergh as President, also expressed her gratitude: “You have been closely associated to the equestrian sport since your childhood. Your dedication will always remain a part of the CHIO Aachen,” she stated. Prior to Carl Meulenbergh, the Prize of the City of Aachen had already been presented to famous personalities such as the jumping sport legend, Hans Günter Winkler, or the former President of the FEI (World Equestrian Federation) Princess Haya. 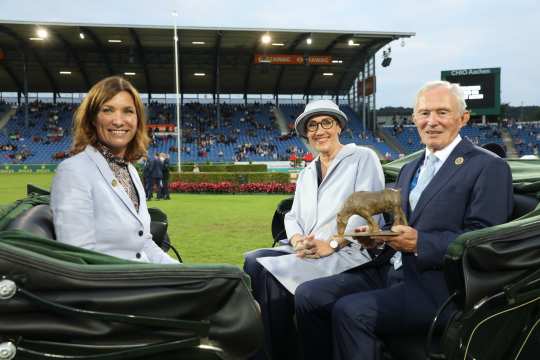