Team Oranje was unbeatable again in the Nations’ Cup of the four-in-hand drivers. Boyd Exell drove to victory in the Prize of the Talbot Family for the eighth time. And the Prize of the Heitkamp & Thumann Group went to Exell’s protégé, who could be decisive for the future of the driving sport.

The Dutch team celebrated a special anniversary at the CHIO Aachen this year: They namely won the Nations’ Cup of the four-in-hand drivers for the tenth time in succession. Whereby their Chef d’Equipe, Harry de Ruyter, clearly pointed out that he was not absolutely satisfied with the performance of his team – Theo Timmermann, Koos de Ronde and Ijsbrand Chardon. Although the three of them won the competition with a clear lead on a score of 336.53 minus points, ahead of Belgium (352.49 minus points) and the Germans (357.62). “Yes, he is very strict,” sighed Ijsbrand Chardon, who had significantly contributed towards the success of Team Oranje after coming third in the Prize of the Talbot Family.

Second place went to a young Belgian trio comprising of Edouard Simonet (27), Dries Degrieck (22) and Glenn Geerts (28). In the Press Conference, the Dutch were asked how they intend to stop the rise of the Belgians, but they obviously didn’t have a clear answer. Instead Chardon’s comment was, “My compliments to the Belgians! It is good for our sport when young people start coming through!”

Third place went to the Germans, which considering their extremely mediocre start in the dressage was a good result, however they did make up good ground in the XXX Pallen Marathon and fought their way back into second place. Only to fall back into third place after the cone driving competition, the Preis of the Heitkamp & Thumann Group. “Too many faults,” that was the sober summary of the team driver, Georg von Stein. His fellow team members were Christoph Sandmann and the European Champion, Michael Brauchle. Things particularly didn’t run smoothly for the latter, he ranked 20th in the competition. After his victory in the Marathon yesterday, Christoph Sandmann, lay in fifth place and after the cone driving ultimately finished sixth. Georg von Stein fell back from seventh into eighth place.

Prize of the Talbot Family – Exell again and again

Even if the Australian, Boyd Exell, withdrew from the winning round in the Prize of the Heitkamp & Thumann Goup, prior to that he had secured his eighth victory in the Prize of the Talbot Family, i.e. the combined classification of the four-in-hand drivers. With a score of 152.75 minus points, he beat his protégé, the Belgian driver, Edouard Simonet (164.41), and his eternal rival from the Netherlands, Ijsbrand Chardon (168.48). He was followed in fourth and fifth place by his team colleagues, Koos de Ronde and Theo Timmermann. Then came Christoph Sandmann as the best German driver.

Questioned as to why he didn’t drive in the winning round, Boyd Exell replied, “The horses had done a good job. The week was long and strenuous.” He is simply a horseman. Furthermore, it meant he could watch his pupil, Edouard Simonet, triumph with a wonderful round in the Prize of the Heitkamp & Thumann Group. In 2010, Simonet completed his degree in Agriculture in France and wanted “to do more than just drive on Saturdays and Sundays”. So he went to work for Boyd Exell, it was possible to observe the fruits of this cooperation today. Simonet’s mentor raved: “You don’t have to tell him anything. He takes everything in with his eyes!”

Today, Edouard Simonet put this all into practice and beat his fellow countryman Glenn Geerts and the Czech driver, Jiri Nescavil. Simonet took 85.42 seconds to reach the finish line. His team colleague was not much slower: 85.92 seconds. And only five hundredths of a second separated him and Jiri Nescavil. The driver from Schleswig-Holstein, Mareike Harm, came fourth. 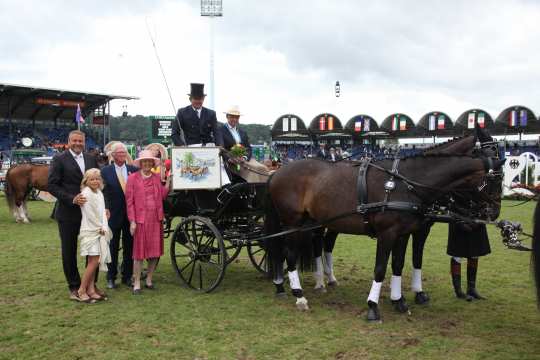