The Australian driver, who lives in the Netherlands, Boyd Exell, won the Prize of Firma Horsch, Der Entsorger, the first dressage class of the four-in-hand drivers with a record result.

Boyd Exell has already won the four-in-hand driving competition at the CHIO Aachen eight times. Last year he had to bow down to his arch-rival the Dutch driver, Ijsbrand Chardon, but one must add that he was handicapped after breaking his leg shortly beforehand. He is fit this year though. That was very evident today in the Prize of Firma Horsch, Der Entsorger. This competition traditionally kicks off the driving competition, but does not actually count towards the overall classification.

The judges awarded the reigning World Champion, 28.70 minus points for his performance – the best result that has ever been recorded! In order to make Exell’s success complete, one of his pupil’s drove into second place on a score of 39.39 minus points: Misdee Wrigley-Miller, from the USA, who won team gold at the World Championships in Tryon 2018. Anyone, who likes chewing gum, will no doubt be familiar with her surname. A team colleague of Misdee Wrigley-Miller, also a member of the gold-winning team from Tryon, came third on a score of 40.26 minus points: Chester Weber. Mareike Harm was the best German driver in eighth place (48.55). 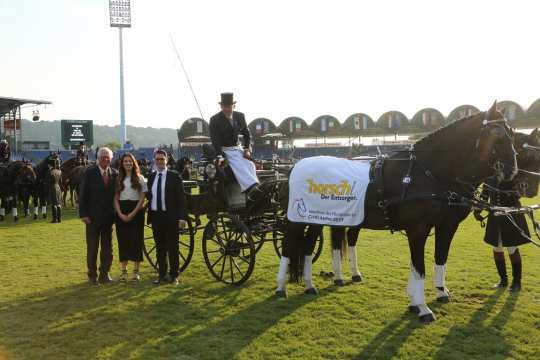