Boyd Exell in the Prize of Martello Immobilien Management GmbH & Co. KG on the way to his tenth Aachen victory

Boyd Exell (AUS) won the dressage competition of the four-in-hand drivers in the Prize of Martello Immobilien Management GmbH & Co. KG today with a score of 36.32 minus points. The driver from Schleswig-Holstein, Mareike Harm, drove into second place on a score of 42.05 minus point, followed by the Dutch father and son duo, Bram and Ijsbrand Chardon. Whereby Bram finished ahead of his father. Chardon Junior was awarded a score of 42.78 minus points whilst Chardon Senior accumulated a score of 43.32.

The Prize of Martello Immobilien Management GmbH & Co. KG is the first of three phases that the drivers have to complete to see who wins the individual and team classifications. 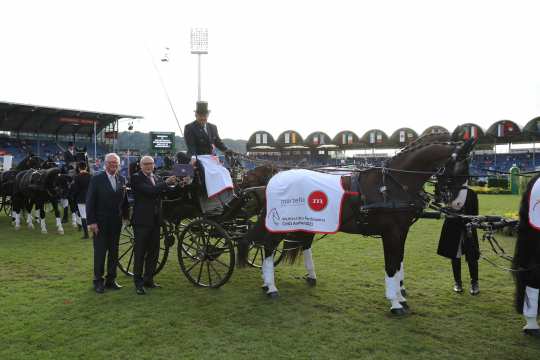