Big Lavazza party at the Soers

One takes a driver, three riders, seven horses and six teams. One puts them under time pressure, plays a fast-paced melody (i.e. “Cotton Eye Joe” or ABBA classics) and sends them off en route. The result: a wild party at the Wimbledon of the equestrian sport, the Aachen Soers. There was only one element that wasn’t too happy about it all: the grass, which suffered slightly under the wheels of the carriages. But the magicians of the course team will have fixed that by tomorrow morning, so that the ground is as immaculate as a golf course. What are we talking about here? The Lavazza Prize at the CHIO Aachen 2016, the World Equestrian Festival. And it really was a festival this evening!

Each team comprised of two show-jumpers, an eventer and a four-in-hand driver. The teams were extremely international. In the end the team that had the master of the reins on their side – the Australian driver, Boyd Exell, won the class. He has competed in five competitions so far at this year’s CHIO and has won each and every one of them, including the Lavazza Prize this evening. Of course, his team colleagues also contributed towards the victory: Guy Williams (GBR) with Carlson and Cassio Rivetti (UKR) with Beau Limit over the show-jumping course and the eventer Christopher Burton with Cariba, who was no doubt still euphoric after winning the Nations’ Cup with the Australian team this morning in the DHL Prize. Conclusion: We want more of the Lavazza Prize! 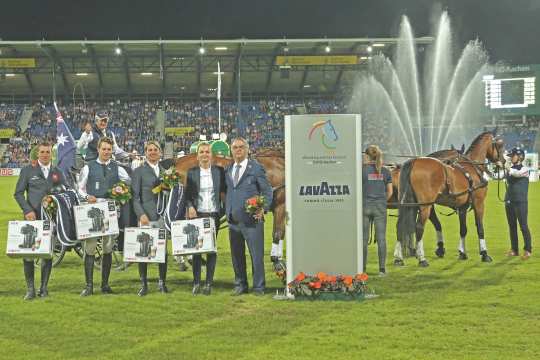