Hattrick for Richard Vogel in Germany’s U25 Trophy

Germany’s U25 Trophy of the Stiftung Deutscher Spitzenpferdesport, Prize of the Müter Family, has a new winner. Or should we say, actually an old winner. Richard Vogel secured himself the victory in the Final in Aachen for the third time.

His name says it all: Richard Vogel (bird) is a high-flyer. In 2018, 2019 and 2021 – the 24-year-old rider has won Germany’s U25 Trophy of the Stiftung Deutscher Spitzenpferdesport, Prize of the Müter Family, three times. The only year he didn’t take part was in 2020, when the Final was staged in Riesenbeck. Today, he rode the ten-year-old Westphalian-bred gelding, Caramba by Comme il faut and snapped up the winner’s sash with a both fast and stylish round, having reached the finish line in the jump-off two seconds faster than his five fellow competitors.

There have been a lot of changes in Vogel‘s life since his first triumph. In 2018, he still rode for the Beerbaum Yard. In 2019 he had already turned self-employed. And since 2020 he has been working together with David Will. Together they run VW Equestrian GmbH located at the Dagobertshausen Farm in Hessen, the base for a growing team of riders with outstanding achievements.

The rider, who came second in this class, Sophie Hinners (23), with the nine-year-old Hanoverian-bred Grey Top daughter, Grace, is also a member of tha afore-mentioned team. Hinners, who is also Vogel’s partner in private life, delivered a super clear round in the time of 53.03 seconds. But her boyfriend didn’t do her the favour of letting her win. But that didn’t bother her, she thought it was okay. I am delighted that we came first and second. At the end of the day, it doesn’t matter which way round.”

Furthermore, she still has several possibilities of doing a lap of honour at the Soers this weekend, because she is also allowed to ride in the Big Tour. Which Richard Vogel would theoretically also have been able to do, he explained. But he hasn’t got a suitable horse at the moment. “But the Rolex Grand Prix – is of course my goal one day. But this is beyond my grasp this year.”

Third place went to a delighted, Franziska Müller (22), with the Cornado daughter, Cornado’s Queen. The pair have been a team for some time already, they already achieved numerous great victories in the Young Rider Tour and are competing at the Soers for the first time this year. “It certainly makes your heart beat faster,” she admitted. But above all she and her horse had fun in the vast arena. This was quite visible, also when one considers the result: Clear in 53.55 seconds.

The further three riders who made the jump-off were Manuel Feldmann and Daydream, who finished fourth with a clear round in 54.85. Fifth and sixth place went to Robin Naeve with the Casall daughter, Casalia (58.73 seconds) and Sönke Fallenberg with Chakira TF (58.86), both of whom picked up four faults. 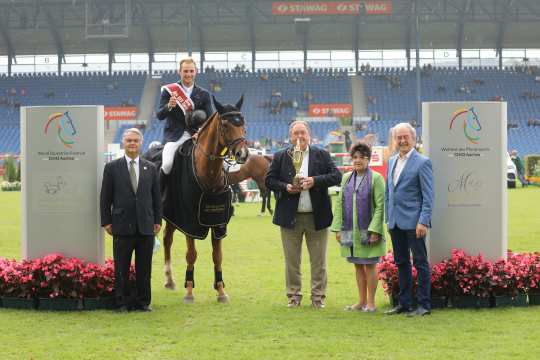 Congratulating the winner: from left, ALRV Supervisory Board member Peter Weinberg, Gerhard and Marion Müter, supporters of Germany’s U25 Trophy of the Stiftung Deutscher Spitzenpferdesport, and Chairman of the Board Jochen Kienbaum.