The DHL Nations’ Cup in eventing has been a fixture on the programme of the CHIO Aachen since 2007. The German ‘bush riders’ (which is how the eventers refer to themselves) have only ever be beaten once at “their” World Equestrian Festival”. That was in 2011, when the title went to Great Britain and Team Germany finished fifth. This year, the guests from Australia won the DHL Nations’ Cup. They had travelled all the way from the other side of the world to compete in Aachen. Most of the eventers from the Oceania, i.e. including the New Zealanders, live in England, the motherland of eventing, in the meantime. But not all of them. And for the two, who travelled to Germany especially for the event, the long journey was certainly worthwhile. Chef d’Equipe, Prue Barrett’s team, comprising of Shane Rose with CP Qualified, Christopher Burton with Nobilis, Samantha Birch with Hunter Valley II and Sonja Johnson with Parkiarrup Illicit Liaison finished on a total score of 145.40 minus points and were thus the clear winners, ahead of the German team on a total score of 154.90 minus points.

Germany’s team was represented by Ingrid Klimke with SAP Escada FRH, Michael Jung with La Biosthetique-Sam FBW, Dirk Schrade with Hop and Skip and Andreas Ostholt with So is et. Chef d’Equipe Hans Melzer was reconciled again after the cross-country today, after in his opinion the rather unsatisfactory performance of his team in the jumping yesterday, where for example Dirk Schrade’s 17-year-old Team World and European Champion, Hop and Skip, knocked down two poles for the first time in his career. Hans Melzer said: “We weren’t very happy after the jumping yesterday. But today that was fantastic cross-country in every respect

In the individual classification, Michael Jung, proved his precision feeling for time again. The Olympic gold medallist, World and European Champions, set off on the cross-country course in the lead with his Olympic candidate fischerTakinou. But today, “he followed his intuition” more today, which meant he was slightly over the optimum time when he crossed the finish line and thus picked up 5.20 penalty points. If I had been just one second slower, I would have come second behind Shane Rose from Australia. But as things were, Jung finished first on a score of 42.40 minus points, ahead of Rose on 42.80 minus points. Whether he had such a good feeling for the clock? “No, you simply have to be lucky!”, admitted Jung. But all in all, he was very happy with how fischerTakinou performed here in Aachen.

Shane Rose was the best Australian rider in second place, ahead of Ingrid Klimke in third and fourth place respectively with her four-legged Olympic partner Horseware Hale Bob OLD and her Team World Champion SAP Escada FRH. Australia’s Christopher Burton, who won the CICO Aachen in 2012 and 2013, came fifth this year with Nobilis, ahead of Michael Jung and La Biosthetique-Sam FBW.

All of the riders were unanimous in one point: It is something really special riding in Aachen. And the National Coach, Hans Melzer, praised the course designer, Rüdiger Schwarz, who had according to Melzer built “a three and a half star course instead of a 3-star course. That really was a fantastic advertisement for our sport! Rüdiger Schwarz is one of the best!” 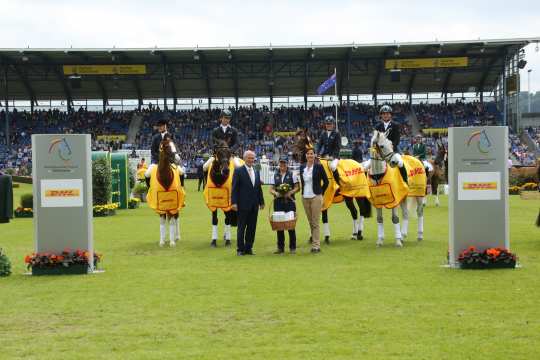 Katja Herbst, Member of the Divisional Management of DHL Paket and president of ALRV, Carl Meulenbergh, congratulating the winning team.