The Danish dressage rider, Anna Kasprzak, has only been riding Quarton, the horse that she hopes will be her next star one day, for around two months. A totally justified aspiration as the Prize of VUV-Vereinigte Unternehmerverbände Aachen, the Prix St. Georges, demonstrated today.


Some of Germany’s best talented young horses had to take their places behind Anna Kasprzak and Quarton in the prize-giving ceremony. The eight-year-old Quaterback son left the dressage arena with a score of 72.237 percent. Second place went to Spain, to Juan Matute Guimon and the ten-year-old Don Crusador son, Dhannie Ymas (71.947 percent).

They were followed by the German horses of the future, who qualified for the Nuremberg Burg Cup – the so-called National Championships for Young Horses. Neck and neck as it turned out. The Team World Champion, Helen Langehanenberg with the Belissimo M daughter Brisbane and the master horseman, Hubertus Schmidt in the saddle of the Westphalian stallion Escolar by Estobar, both shared third place with a score of 70.816 percent.

The two team gold-medallists from the Rio Olympics Games, Kristina Bröring-Sprehe and Sönke Rothenberger ranked fifth and sixth. Bröring-Sprehe presented a potential successor to her Olympic horse Desperados, the eight-year-old Destiny, who is incidentally a son of her successful sports partner (70.474 percent). Rothenberger rode the just seven-year-old, Sankt Anton, who competed in his first international class ever here in Aachen (70.342 percent).

Anna Kasprzak was delighted at today’s victory. She has big plans for Quarton. She noticed him at a show at the beginning of the year. She subsequently couldn’t stop thinking about him and after her trainer Andreas Helgstrand rang and told her that he had found out that Quarton not only had very good movements, but also an exceptional talent for piaffe and passage, everything was clear. “I wanted a successor for Pepe (her Championship horse Donnperignon, editor’s note),” Kasprzak explained. She recounted that Quarton is not only very talented, he also has a very good interior: “He is great fun to ride. He is so uncomplicated, not only under the saddle, but while handling him as well.” It was the horse’s first appearance in Aachen. “He was a little jumpy when he entered the stadium,” his rider admitted, “but he carried on going all the same.” And that is precisely what distinguishes a horse with a good interior. How die her show-jumping colleague, Sergio Alvarez Moya, put it yesterday? “In Aachen one recognises the quality of the horses.” 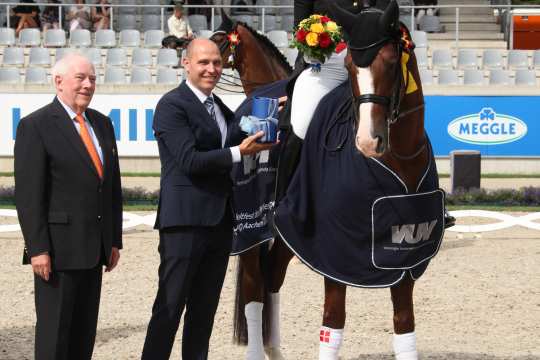