The dressage rider, Anabel Balkenhol, celebrated a sweet victory this evening in all terms of the word at the World Equestrian Festival, the CHIO Aachen. She won the Grand Prix Spécial, the Prize of the chocolate company Lindt with her top horse Dablino. The pair demonstrated everything it comes down to in the dressage sport: Elegance, lightness and harmony. This was rewarded with a score of 75.471 percent. Anabel Balkenhol’s reaction after her ride spoke for itself: “I am incredibly happy! It is simply great fantastic, in what good form Dablino in. He is such an impressive horse and he hasn’t lost any of his aura even though he is already 16 years old.” The judges were obviously of the same opinion. And for Anabel Balkenhol it was a more than conciliatory end to a day most of which she had spent in her lorry trying to get over a feverish cold.

Second place went to the winner of the Grand Prix, the professional rider Hubertus Schmidt with his Trakehner stallion, Imperio. Unfortunately, the pair made some expensive mistakes in their test, which cost them valuable points. Their final score: 74.157 percent.

Third place went to Jessica von Bredow-Werndl and her KWPN stallion Unee BB, who came second in the Grand Prix. The judges awarded the rider from Bavaria 73.941 percent today. Fabienne Lütkemeier and D’Agostino completed the German quartet at the head of the scoreboard with 72.824 percent.

Every competition in Aachen counts for the German riders because the tickets for the Olympic Games in Rio still haven’t been distributed yet. This evening may have reshuffled the deck again. 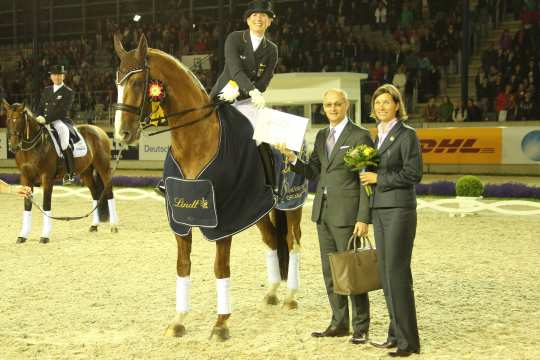