An app for the well-being of the horse

The winning project at the second CHIO Aachen CAMPUS Hackathon

Making the CHIO Aachen fit for the future with new ideas – that is the principle behind the Hackathon, which the CHIO Aachen CAMPUS organise jointly with the digitalHUB Aachen. After the premiere last year, young people met up for the second time to develop innovative projects over the course of three days and two nights.

The jury evaluated the project of team “CHIO Vision” – comprising of Stephanie Käs und Henrik Thillmann – to be the most convincing. The pair developed an intelligent movement monitoring app. The focus lies on artificial intelligence, which recognises misalignment in the horse and rider in real-time based on camera recordings. “This intelligent technique can be implemented to support the stewards deployed on the training areas at the CHIO to help them with their work for the well-being of the horse,” stated Stephanie Käs. Second place went to the team “One Transport”, who developed a platform, which thanks to a combination between a transport concept and a software-based solution, guarantees low-emission travel to and from the CHIO Aachen. The project was also distinguished as the most innovative idea. Team “CHeco” came third with an intelligent, software-controlled irrigation system.

“The winning project,” Philip Erbers, Chairman of the Aachen-Laurensberger Rennverein e.V. (ALRV), organisers of the CHIO, stated “fits in wonderfully with our credo that the horses’ well-being takes priority. The theme the welfare of the horse is a key issue for us.” Stephanie Käs and Henrik Thillmann have developed a tool that not only assists the stewards with their work, but which can also expand the existing training offers of the CHIO Aachen CAMPUS. Because ultimately the software is not only able to recognise misalignments of the horse, but it can also be used to analyse the seat of the rider. The fact that the two computer experts from team CHIO Vision also won the “Community Prize” shows how right the jury’s decision was. The votes of all of the participants of the CHIO Aachen CAMPUS Hackathon counted for the Community Prize.

Erbers commented further that “the digitalisation is an excellent tool to achieve added sustainability.” Whereby as the President of the ALRV, Stefanie Peters, underlined the fact that for the organisation the term sustainability also includes social sustainability. This was also taken into account by the 50 young people, who spent day and night in the spacious lounge of the Albert-Vahle Arena from Thursday to Saturday again developing both exciting and innovative ideas. There were texters and developers, designers and advertisers, but also specialists such as a geologist, a laboratory chemist or a doctor among them. The ideas that were presented to the jury – comprising of Thomas Esser (Director Global Sponsorships SAP SE), Andreas Schneider (Managing Director NetAachen GmbH), Iris Wilhelmi (Managing Director digiHub Aachen), Conny Mütze (authorised signatory, Aachener Reitturnier GmbH) and Philip Erbers – in five-minute pitches were correspondingly diversified.

The judges not only paid attention to the technical realisability of the projects, but also “that the project also suited the CHIO,” stated Andreas Schneider, who was full of praise for all of the teams: “Outstanding, what was presented here today.” The spectrum of ideas presented ranged from a “CHIO Aachen Green Mile” as a platform for presenting existing ideas, to a geothermal plant, a sustainable payment system through to a Sustain-O-Meter, which also makes sustainable projects visible for the visitors, sponsors and media. “They really are fantastic ideas and innovative approaches of how one can make the CHIO sustainable,” commented Thomas Esser from SAP.

The board member of the ALRV, Philip Erbers, who is among others responsible for the areas Digitalisation and Sustainability, considered this second Hackathon to be a great success: “We experienced a fantastic spirit here over the three days. Young people worked on a wide range of themes with total enthusiasm and the teams also supported each other mutually and worked jointly towards achieving the aim. The fact that such outstanding ideas, both for the ecological and social sustainability, were developed confirms our concept of the Hackathon.”

The winners received 5,000 Euros in prize-money and they were completely overjoyed: “It is marvellous that we were able to convince the jury and participants with our idea, that really is very, very cool,” exclaimed Stephanie Käs during the award ceremony that was hosted by Robert Esser. The team that came second won 2,500 Euros, and third place was endowed with 1,500 Euros. The most innovative idea and the Public Prize were endowed with 500 Euros apiece. 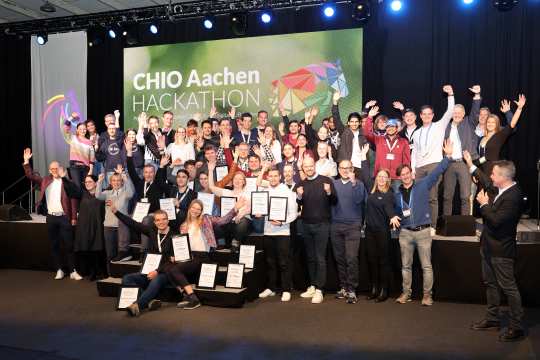 Participants, organizers and jury of the second CHIO Aachen CAMPUS Hackathon. In the front in the middle the two winners Stephanie Käs and Henrik Thillmann. Photo: CHIO Aachen/ Andreas Steindl.