Sergio Alvarez Moya from Spain rode to victory in the Sparkassen-Youngsters-Cup with his talented young horse G & C Wolf and explained how one can recognise the quality of horses in Aachen.

An extremely well-spirited Sergio Alvarez Moya took pleasure in being celebrated by the crowd in Aachen after his superior victory in the Sparkassen-Youngsters-Cup with the just seven-year-old KWPN-bred gelding, G & C Wolf by Harley VDL. The pair crossed the finish line clear in a time of 65.37 seconds. The Spanish rider hadn’t really expected to win. Although G & C Wolf didn’t pick up a single fault in the past year, as Alvarez Moya reported. However, he had given the gelding a longer break after the season. “One is sometimes inclined to do too much, too early with the good horses,” he explained, “which is why I didn’t compete with him at any shows.” Aachen is only the pair’s second public appearance this season. “I competed in two small classes with him last week. He didn’t feel quite as good there. He was a little spooky. One noticed that the show routine was lacking somewhat.” He added that he had been totally different today: “He likes this stadium! That underlines the quality of a horse. The good horses excel in such an atmosphere. Others are shy and underperform.” Wolf obviously belongs to the first category.

The same also applies for the horses that ranked behind him. The eight-year-old Holsteiner Sandero by Sandro Boy came second with the Belgian rider, Gregory Wathelet. The chestnut gelding jumped marvellously with an excellent technique and always maintained a nice forward pace. The clock stopped at 66.99 seconds. The round of the horse that came third, the Irish-bred HHS Hercules, was equally nice to watch. The pedigree of the gelding is unknown, whereas the rider is one of the VIPs, who has been celebrating victories in Aachen for years: Beezie Madden from the USA. The two haven’t been a pair for very long. Their first show together was in mid-June in Spruce Meadows, the venue of the second Rolex Major. The pair competed there three weekends on the trot and picked up several placings – good training for the Soers, because the show also boasts a huge grass arena. A fast round in the time of 67.51 seconds in the Sparkassen-Youngsters-Cup is a good indication that the preparation in Canada paid off for the CHIO.

The best German rider was Marco Kutscher with the also eight-year-old Westphalian-bred stallion, Charco by Chin Quin. The stallion with a Russian owner impressed the spectators because he jumped so cautiously as well as recording the fifth fastest time (69.70). 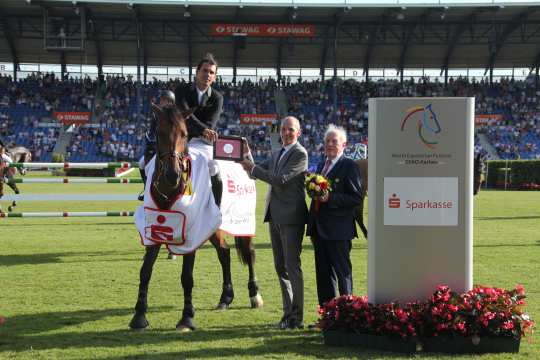