The Saturday highlight in the Main Stadium at the CHIO Aachen 2019 was the Allianz-Prize, a 1.55-metre jumping competition with a winning round. The victory went to the USA.

32 pairs in total set off on the 540-metre long course comprising of 13 obstacles and 16 fences. Ten of them went through to the winning round. The number one in the world ranking list, Steve Guerdat, achieved the fastest round with Venard de Cerisy, reaching the finish line in 53.51 seconds. However, two rails down stood in the way of the victory. Which McLain Ward (USA) snapped up with the horse that he only introduced to the international circuit at the start of the year: the ten-year-old Oldenburg-bred mare, Noche de Ronda.

The clock stopped at 55.29 seconds, which left Martin Fuchs (SUI) with Silver Shine behind him in second place (0/56.20). Third place went to the British rider, Ben Maher (0/58.98) with F One USA, the horse he took a bad fall with on Wednesday, luckily both remained unscathed and were fit to compete today.

Noche de Ronda was originally registered in Germany under the name Ramba Zamba RT. “RT” for the breeding alliance Richter-Irps & Tiefenthal. She is by Quintender out of a dam by Lovis Corinth/Sandro-Ramino. Before McLain Ward started riding her she had only competed in one young horse competition in Germany with Dennis Schlüsselburg. This year McLain Ward has already won three classes and come under the top ten with her in four other competitions at just five shows. Today, they added a further victory to the list. 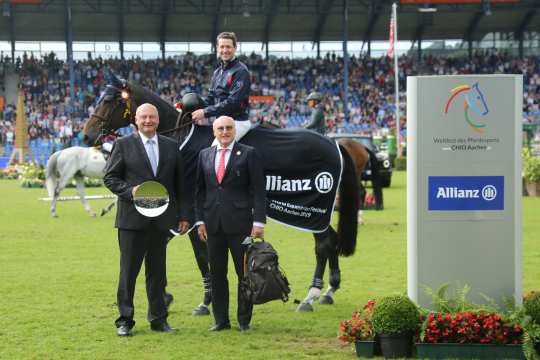 The winner is congratulated by Dr. Jochen Schübbe, Head of Sales Directorate Cologne, Sales Director and Wolfgang "Tim" Hammer, member of the supervisory board.