Perfect conclusion to the FEI Youth Equestrian Games 2022 at the CHIO Aachen. The 30 youths from all over the globe presented top jumping sport in the sold-out stadium. South Africa won gold, silver went to Morocco and bronze to the USA.

“We said earlier today, how cool it would be to come first or second. Then, it actually happened, it is a dream come true!”, raved an overwhelmed Thomas van Rijckevorsel, with the gold medal draped around his neck. Together with the Hanoverian-bred mare Lucy by Lux Z, he presented South Africa at the FEI Youth Equestrian Games. On Thursday, he already won bronze with the African team and now he also topped the rankings in the individual classification. His team colleague and new friend, Jad Guerraoui from Morocco, finished second with Lady Angeles by Los Angeles. Bronze went to the USA, to Mimi Gochman with the ten-year-old Darco son, Merino van de Achterhoek. Gochman already competes successfully at four-star level.

The riders competed on horses that were allocated to them by draw, which had previously been carefully selected especially for the purpose by Holger Hetzel and his team. To a large extent, the 30 youths from all over the globe aged between 15 and 18 formed a good partnership with their new four-legged partners. The three medal winners reported that they had tried to spend as much time as possible with the horses to build up a relationship with them within the short period of time. That obviously seems to have worked and not just for them.

The first FEI Youth Equestrian Games, that were staged as a replacement for the Youth Olympic Games that has been postponed until 2026, were a huge success. In Thomas van Rijckevorsel’s words: “It was incredible. I still haven’t taken it in properly yet. That is the best thing that has ever happened to me.” He now has a new goal: “After this week, I definitely want to come back and compete in Aachen. I would like to pursue a career in this sport. It is my life.”

He has quite good chances of doing so. After all, Martin Fuchs won his first international (team) gold medal at the first Youth Olympic Games in the year 2010. And today he is number one in the world ranking list of the show-jumpers… 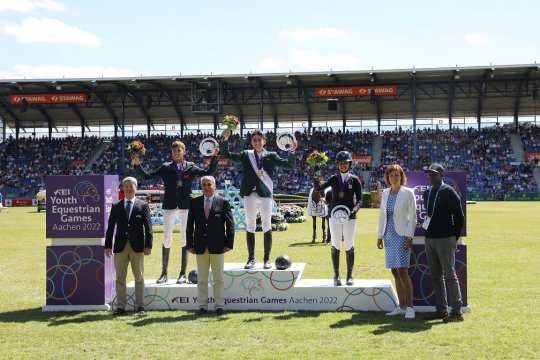