Action please in the porta-Cup!

When six teams each comprising of a show jumper, an eventer and a four-in-hand driver race around the Soers, then it is time for the porta-Cup at the CHIO Aachen!

The principle is simple, when one has already experienced it once: All three team members come together in the Main Stadium. The eventer kicks off by jumping over a course of solid fences. As soon as his horse has jumped over the last fence, the show-jumper takes over and paces over the show jumping course as fast as possible. While he is doing so the eventer hands over his horse to the groom and climbs up on a pedestal waiting for the show-jumper to master the final obstacle. Then the fitness of the eventer is tested, since he has to sprint over to the driver’s carriage and jump on, then they set off on the Jump and Run part of this competition à la CHIO, otherwise known as the porta Cup.

Team 1 comprising of Laura Collett (GBR), Patricio Pasquel (MEX) and Michael Brauchle set the bar high with their opening performance: 149.01 seconds. However, Team 2 (Lara de Liederkerke, Sanne Thijssen, Bram Chardon) were faster: 147.25 seconds. Then, it was Team 3’s turn: World Champion Boyd Exell on the carriage, the show-jumper from the USA Lillie Keenan and Australia’s cross-country expert, Andrew Hoy, who despite his 62 years took on the role of the sprinter. Those who thought that the ten-time Olympian and three-time Olympic gold medallist would be at a disadvantage here, were able to experience live today that riding definitely keeps people fit and young. And as the master driver, Boyd Exell, then found a particularly clever way round the obstacles, they had the cat in the bag: In spite of picking up penalties for a dropped ball, Team AUS/USA claimed the victory with a total time of 145.53 seconds. 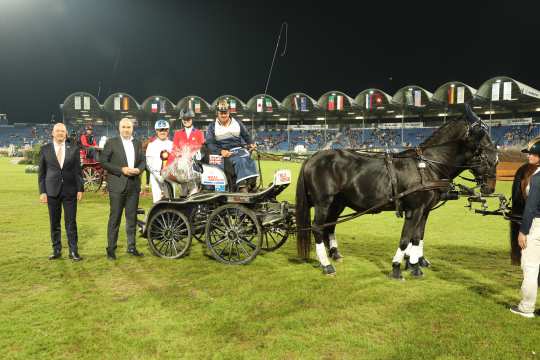