In addition to world-class equestrian sport, exceptional shows have long since become an integral part of the CHIO Aachen. The action kicked off on Friday and Saturday evening with no less than two editions of the “Horse & Symphony” concert. It was imaginative, colourful and spectacular. There was also great music to be heard in the “circus ring” in the Deutsche Bank Stadium.

One takes the fabulous live music of the Aachen Symphony Orchestra, artists, dancers, a pinch of magic and of course plenty of horses. The result is an orchestration of the concert classic “Horse & Symphony”, which whisked the crowd off into an imaginary world full of fun, spontaneity and magic.

Enchanted everyone looked to the skies where a charming harlequin alias the aerial acrobat Nadia Meinhardt abseiled down into the Deutsche Bank Stadium from a staggering height and asked the Grand Prix rider Britta Rasche-Merkt and her Lusitano stallion Xerex to dance. A magical show act that was accompanied by a medley from Robert Longfields’ La Land played by the Aachen Symphony Orchestra under the direction of the General Music Director, Christopher Ward (Friday) and Hiroshi Ueno on Saturday as well as by dancers from the Ferberberg Ballet School.

This was followed by some of the most popular pieces of music from classic history: From Fučíks “Entrance of the Gladiators”, to Jacques Offenbach’s “Can-Can” and  excerpts from “Cavalleria Rusticana”, through to popular melodies from “Indiana Jones” and “Forest Gump”. And action-packed show acts. The “Madness Brothers” gambled through the Aachen skies, more than 30 Shetland ponies sped around the arena, over 50 children from Aachen danced through the arena on their hobby horses and a group of vaulters led by the Brüsewitz brothers carried the crowd off into the magnificent world of the circus. And the probably most popular clown of our era made several appearances in the Deutsche Bank Stadium. Together with his brother Daris, the duo is a worldwide attraction.

The appearance of Liska Lorca from France was mystical. In a joint performance with two white stallions of the show team, Mirage Español, that danced through the arena pulling impressive balloons, under spotlights the French artist impressed with a colourful choreography on an overdimensional screen.

Also part of the show: Jesse Drent. He impresses almost half a million followers on the social media channels, the Dutch performer travelled to the Deutsche Bank Stadium especially for the Horse & Symphony and conquered the hearts of the crowd in Aachen together with his Shetland stallion, Macho. There was a special highlight at the end when the fairy-tale like parade of the “FierS à Cheval” street theatre conjured up a fantastic pageant with their larger-than-life, oversized horse figures made of light, air and transparent fabric and their artistic choreography of formations in the sand at the Soers. That was magical! 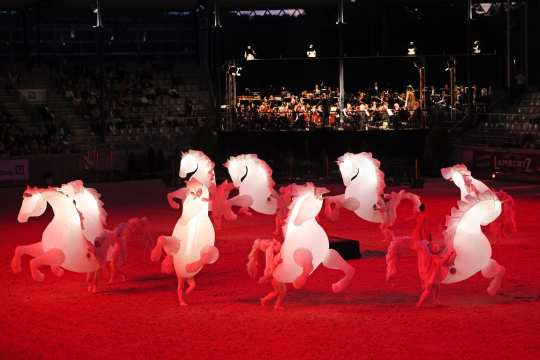 The “FierS à Cheval” street theatre travelled to the Deutsche Bank Stadium from near to Lyon in France. Photo: CHIO Aachen/ Andreas Steindl