Aachen Dressage Youngstars: On the tracks of Isabell Werth

Last year’s premiere was a total success, now the CHIO organisers are staging the “Aachen Dressage Youngstars” for the second time. The best aspiring young dressage riders in three age groups will be competing against each other at the Albert-Vahle Arena from today until Sunday.

The 62 competitors come from ten nations. 23 of them are Young Riders (aged up to 21), 22 are Juniors (up to 18) and 17 Pony Riders (up to 16). In the past, the organisers, the Aachen-Laurensberger Rennverein e.V. (ALRV), received requests from many sides to not only stage a jumping show, but also a dressage show for aspiring young talents. “We were very pleased with the first Aachen Dressage Youngstars,” said Frank Kemperman, Chairman of the ALRV. Enthusiastic athletes and lots of spectators – so there was no question about the fact that a second edition of the 2018 Show would be organised.
Kemperman is also impressed with the field of competitors: “The who’s who of the youngsters are participating,” the Dutchman reported. For example, the German Champion and European team gold medallist, Lia Welschof from Paderborn is travelling to Aachen to take part in the competitions for the Young Riders. Romy Allard (Juniors) who claimed team silver at the last European Championships in Fontainebleu, France, is also on board. And Lucy Anouk Baumgürtel, the European Champion in 2017 and 2017 as well as the current European Team Champion of the Pony Riders, will also be in action live at the CHIO Aachen grounds. Johanna Kullmann, the defending titleholder will also be competing in the classes of the Pony Riders.
As in the previous year one of the highlights is going to be the “Aachen Late Night presented by Allianz” – a show evening focusing on dressage. There is free admission to the entire show including the evening event. On Saturday evening, among others the dressage star, Uta Gräf, will be performing in the Albert-Vahle Arena with her successful mount “Le Noir”. The complete programme is available at www.aachenyoungstars.de. 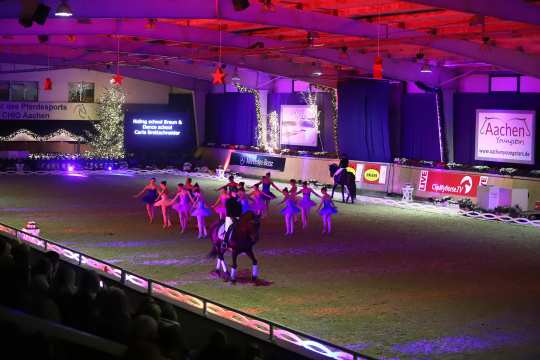