Top-class conclusion to the season before Christmas

Top dressage sport and a festively decorated indoor arena – these are the ingredients of the Aachen Dressage Youngstars, of the star-studded show for aspiring young dressage riders held at the CHIO Aachen grounds at the end of the year. 83 participants from 13 nations will compete against each other from November 24th – 27th.

“Of course, I always pop in and take a look at the Deutsche Bank Stadium when I am in Aachen,” the 15-year-old Rose Oatley. After all, the cathedral of the international dressage sport at the traditional showgrounds of the CHIO Aachen is right next door, when the best young dressage talents compete in the Albert-Vahle Arena from November 24th-27th. One of the big dreams of the three-time Pony European Champion of the Year 2021 is to compete at the CHIO Aachen one day. But first of all she will be battling against 82 further talents from 13 nations for the victories in the Grand Prix and the title of Indoor Champion at the Aachen Dressage Youngstars.

Rose Oatley already knows what it feels like to be crowned the Pony Champion at the Youngstars, because she claimed the title in 2019 and 2021. “To win in this arena is something really special,” said the young rider from Lütjensee, who would like to notch up a hattrick this year together with her exceptional pony, Daddy Moon. However, she is up against tough competition – particularly from her own country. Namely, all of the members of the gold-winning team from this year’s Pony European Championships – Lilly Marie Collin, Mia Allegra Lohe, Franziska Roth and Julie Sofie Schmitz-Heinen – will be competing in Aachen.

The favourite in the Juniors age group is the title defender and double European Champion, Allegra Schmitz-Morkramer. The 17-year-old is travelling to Aachen with her star horse, Libertad, and will be taking on her European Championship team colleagues, Carolina Miesner and Fanny Jöbstl, for instance. The Austrian rider will enter the dressage arena in Aachen with the mare, Simsalabim OLD, who was previously successful under Charlotte Schürmann. Her brother, Paul Jöbstl, is one of the current members of the CHIO Aachen CAMPUS Programme of Excellence. The 19-year-old, who headed home after the European Championships in Hartpury, Great Britain, this year with the bronze medal in its pocket, will be taking on the title defender Jana Lang and Moritz Treffinger, who took part in the second year of the CHIO Aachen Programme of Excellence. They will all strive to take the victory in the Young Riders classification. In the Children’s competition the Belgian rider Amber Hennes and Robin Dicker from the Netherlands, who won silver and bronze respectively with their teams at the European Championships in Pilisjászfalu, Hungary will be contending against the Team European Champion Alessa Marie Maass from Germany. We can definitely look forward to top-level sport in this age category.

“Promoting aspiring young riders is a matter very close to our hearts,” said Birgit Rosenberg, “which is why we are delighted that we will be able to experience the best young athletes live again just before the year comes to a close,” commented the board member of the Aachen-Laurensberger Rennverein e.V. (ALRV), organisers of the event. Admission to the show in the Albert-Vahle Arena is free of charge on all days. This also applies for the “Late Night” on Saturday evening, when the  FN Training Ambassador, Christoph Hess, will hold a live training session with three talented young riders and thus provide interesting insights into the work with horses at different training levels. Anyone not able to be there live, can watch all competitions live on our website or via Clip My Horse Germany. The following week, the show-jumpers will then travel to Aachen from December 1st-4th for the “Aachen Jumping Youngstars – Salut Festival”. 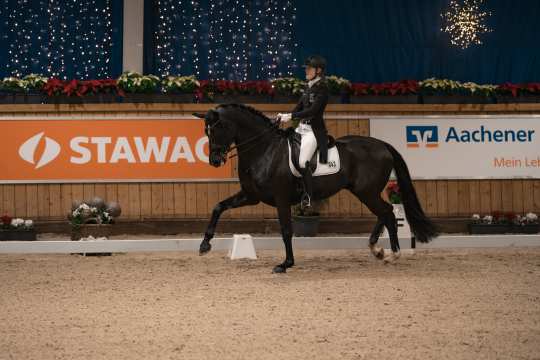 She is the title defender of the Juniors and double European Champion: Allegra Schmitz-Morkramer is competing at the Aachen Dressage Youngstars. Photo: Aachen Youngstars/Jil Haak