"A CHIO Aachen we all know and love."

Horses on the market square in Aachen plus the CHIO Aachen mascot “Karli” and well-pleased organisers: The good atmosphere wasn’t only down to the weather, but also due to the fact that everyone is immensely looking forward to a CHIO Aachen the people know and love. There was plenty of good news at the press conference four days before the event kicks off.

The field of competitors: Absolutely world-class. The anticipated mood: Exceptional. The accompanying programme: Spectacular. “CHIO Aachen again at last,” that’s how Daniel Deußer, number one in the world rankings list of the show-jumpers, put it. And for him the chance to finally make his big dream of taking the victory in the Rolex Grand Prix come true. He has come second twice, narrowly missing out on having his name eternalised on the legendary winners’ board in the Main Stadium. “I want to be on there,” grinned Deußer on Monday morning, who will be travelling to Aachen with his Olympic partner Killer Queen and Bingo Ste Hermelle. Nobody could know better what it is like to be listed on the board than the dressage superstar, Isabell Werth. Her name is listed an incredible 13 times. Her motivation to achieve entry number 14 could be even higher than usual this year. Because she will be saddling her “soul mate” Bella Rose for a major competition for the very last time. “It is going to be emotional,” the most successful rider of all time commented. Some fans will shed the odd tear on Saturday evening too: That is namely when the show-jumper Marcus Ehning will be retiring his “Pret A Tout” from the sport. The duo won the Rolex Grand Prix in 2018 and also rode to victory with the team in the Mercedes-Benz Nations Cup.

The Show Director, Frank Kempermann, was able to announce an exceptional field of competitors including all of the individual Olympic gold medallists – who will also all be taking part in the Opening Ceremony on Tuesday evening, 14.9.: The show-jumper Ben Maher (GB) is travelling to the Soers with “Explosion”, who is perhaps currently the best show-jumping horse in the world. The dressage Olympic gold medallist, Jessica von Bredow-Werndl, will be competing on the German team in the Lambertz Nations Cup and of course in the Deutsche Bank Prize. Julia Krajewski, who claimed gold in the eventing in Tokyo, will be competing in the spectacular “porta Cup” on Saturday evening, a combination between show-jumping, eventing and four-in-hand driving. All of the athletes will be battling it out for record prize-money: The overall prize-money totals 3.4 million Euros, an absolute record for Aachen.

Stefanie Peters, President of the organisers, the Aachen-Laurensberger Rennverein (ALRV), promised, “A fantastic atmosphere, mood and that very special CHIO Aachen flair,” over the ten days of the show. With the “greatest normality possible”. The visitors will however have to be prepared for things “which have long since become part of our daily lives,” Frank Kemperman stated. For example, in addition to having to show proof of vaccinations, recovery or a negative test, masks have to be worn until one is seated. “We are organising a CHIO, which will impress, but which at the same time offers the greatest possible safety,” explained Kemperman. Sibylle Keupen’s anticipation for the event is thus correspondingly high. The show is an “important brand, which represents the city of Aachen throughout the world,” for Aachen’s Mayoress.

Michael Mronz, General Manager of the Aachener Reitturnier GmbH (ART) had some good news for the CHIO fans: Tickets are still available for most of the competitions, they can be booked via the CHIO Aachen online ticket shop. It is no longer necessary for the tickets to be personalised. Furthermore, Mronz introduced a totally new, online format: The organisers will be broadcasting the “CHIO Aachen Digital Magazine daily at 7.30 p.m. via YouTube and Facebook. “This new format will include around 30 minutes of talks, background information and short, entertaining sport and lifestyle clips,” Mronz reported. He also welcomed a special guest during the press conference: The illustrator Lisa Santrau worked live on a “Selfie” Spot during the press conference, in manga style in fitting with the partner country, Japan. The CHIO visitors can take or have photographs taken in front of seven such spots), in addition to the manga drawing, further spectacular motifs are waiting to be discovered.

Tickets for the CHIO Aachen 2021 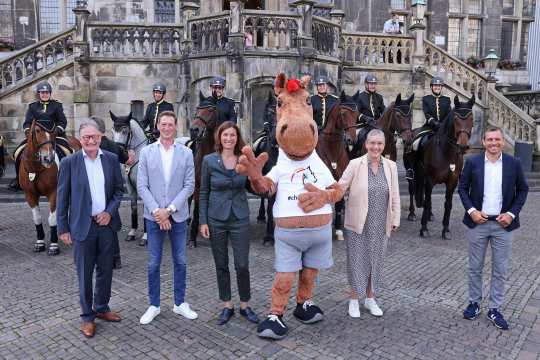