Concert "Horse and Symphony" in the sign of France. There are still few remaining tickets.

Last year he was one of the spectators. However, this year it is serious. On Friday, July 12th, Christopher Ward, the new General Music Director of the City of Aachen, will be stood at the conductor’s stand in the Deutsche Bank Stadium. At 8.30 p.m. the first note of the probably most exceptional concert of the year will sound under the direction of the conductor, who was born in London: “Horse and Symphony” at the CHIO Aachen. The title this year: “La vie est belle”!

“Horse & Symphony” made its debut at the Soers in the year 2003. A “product of chance” as Show Director, Frank Kemperman, revealed to the press conference in Stable 6 at the showgrounds. The General Music Director at the time, Marcus R. Bosch, was considering giving a concert in the Deutsche Bank Stadium. Kemperman gave the green light – albeit under one condition: Only in combination with horses. “Horse and Symphony” was born. In the meantime, the concert has become a fixed part of the World Equestrian Festival. Indeed, over the past few years two concerts have been held on the first weekend of the show, in order to satisfy the high demand. The interplay between the orchestra comprising of 70 musicians and the individual show acts has not lost its fascination over all of the years. The challenge for the performers also remains. “The timing down to the very second is what counts with “Horse & Symphony”. It is something very special when the music has to be precisely aligned with a movement, a dance or a certain speed,” explained Ward.

So that everything fits perfectly this year for the premiere again, numerous individual rehearsals have taken place over the past weeks. Next Thursday it is finally time for the dress rehearsal. Then the musicians, a soloist, 60 horses and 170 performers will come together for the first time. And what can the visitors look forward to? “It is going to be very French,” grinned Ward. Not only regarding the selection of music with excerpts from Carmen, Jacques Offenbach’s CanCan and George Bizet’s L’Arlesienne. The many show performance also play homage to this year’s partner country, France. Whether Camargue horses or the “living” museum of horses from Chantilly – it is going to be unique. And one star is actually returning to Aachen: Jean-François Pignon, who commands his profession as a liberty dressage master like no other. The German Olympic Games dressage rider, Helen Langehanenberg, who will be demonstrating her show skills under the spotlight once more, is also on board. Show Director, Frank Kemperman, is already convinced now: “It is going to be tremendous.” Saturday’s show is sold-out. Admission tickets are still available for the concert on Friday, either online or from the hotline: #49-(0)241/ 917-1111.

The video on the press conference. 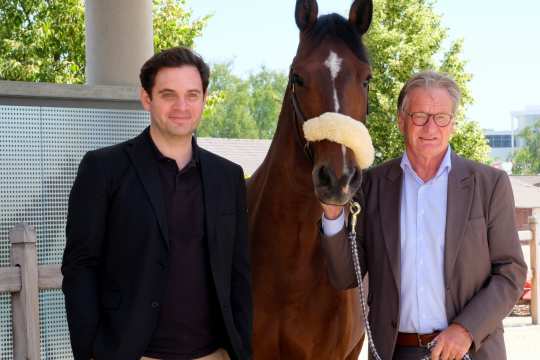