Ludger Beerbaum is on board and Isabell Werth. Annica Hansen and Ingrid Klimke, Scarlett Gartmann and Jessica von Bredow-Werndl too, as well as many, many others. Over the course of six evenings, from August 4th-9th, the “CHIO Aachen digital” awaits us – free of charge on YouTube and Facebook, at chioaachen.de and on clipmyhorse.tv.

“In the form of a daily 90-minute report, we will bring the true CHIO Aachen feeling to the people’s homes, is how Michael Mronz, General Manager of the Aachener Reitturnier GmbH describes the idea. The format is being hosted by the CHIO Aachen stadium presenter, Annica Hansen (@annicahansen) and the influencer, Saskia Meyer-Hellwig (@biniebo).

The programme will summarise many clips of varying lengths – it is all about sport and entertainment, stars from the equestrian sport sector and social media are all participating. International top riders will compete against each other in the “Challenges”, professionals will give practical tips and sporting legends will look back on their biggest CHIO moments. There will be plenty of entertaining rubrics, repeat coverage of the most important classes of the CHIO Aachen 2019 and daily Talk guests – all linked together by the hosts Annica Hansen and Saskia Meyer-Hellwig.

The main focus of the Sport Challenges is quite clearly having fun – that’s why there aren’t any judges, the athletes namely judge each other. And the CHIO Aachen fans are part and parcel too – with the aid of the Judging App they can also award marks from 1 to 10 for the respective performance. “In the dressage, a white hanky will also be waved now and again on the centre line – á la Aachen,” grinned Frank Kemperman, Chairman of the ALRV. Whilst on Tuesday, August 4th the emphasis of the report is going to be the Opening Ceremony and the Media Night, from Wednesday onwards the focus will be on the five CHIO Aachen disciplines. In addition to the Dressage, also a Jumping and Vaulting Challenge will be staged. The eventing on the other hand will be completely virtual: By means of software that was developed by the official CHIO Aachen technology partner, SAP, a competition can be completely simulated based on historic data. And the fans and followers can become part of this competition via the free “Eventing Manager” app. In the four-in-hand driving discipline, father and daughter Sandmann (D) will be taking on father and son Chardon (NL), the eternal duel between Germany and the Netherlands. “We will also bring shows like “Horse & Symphony” to the living rooms of the fans in a totally Corona-safe manner,” promised Kemperman. On top of this, there is also a digital Blogger Lounge with several of the most exciting influencers from the field of equestrian sport as well as plenty of background information, material that hasn’t ever been published before and extraordinary moments at chioaachen.de.

To the CHIO Aachen digital 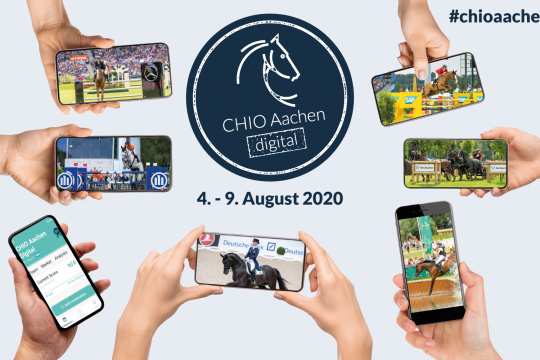