Coincidences sometimes happen at the CHIO Aachen too: The 21st Soers Sunday, the “Open Day” with free admission fell on July 14th this year. This date is of course also France’s national holiday. And France is the official partner country of the CHIO Aachen this year! And voilà: The perfect combination was born.

So it was clear that Eiffel Tower “en miniature” in the “Rue France” in the CHIO Aachen Village was one of the most popular motifs for snapshots of all kinds on Soers Sunday. But that wasn’t the only place plenty of things could be discovered. Around 30,000 visitors made sure they didn’t miss out on the special combination between an exciting supporting programme, shopping in the CHIO Aachen Village comprising of over 230 exhibitors in 250 tens, culinary offers and taking a stroll. The perfect family day out or excursion with friends!

Even before the gates officially opened at 10 o’clock, the first curious visitors were queuing up at the main entrance. A short time later, the grounds were already crammed full. The event programme kicked off at 11.30 a.m. in the Deutsche Bank Stadium with a festive Ecumenical Service following the motto “Hubertus Mass – safely guided on eagles’ wings”. But not only eagles, also horses, dogs and falcons were part of this special, open-air mass. The impressive animals of the Hellenthal Wild Park made a further appearance later on in the scope of a colourful afternoon show on the show jumping warm-up area. They were also in good company. After being greeted by the CHIO Aachen mascot, Karli, diverse performers took to the spacious arena, which was lined by crowds of spectators. A drag hunt presented by the Rheinisch-Westfälischen Schleppjagdverein e.V., as well as the five disciplines at the CHIO Aachen were on the not-to-be-missed list of events. Together with the partner country France and its famous Camargue horses as well as the “Connemara Show Team”, which performed a diversified show act comprising of 20 ponies in total under the motto “Irish Connemaras visiting France”. At the same time, many visitors watched the “CIAT – International Traditional Driving Tournament” in the Driving Stadium. A wonderful sight: The wonderful “green” of the Driving Stadium, magnificently turned-out, historical carriages and drivers in traditional costumes.

But there was even more for the smaller visitors to discover on Soers Sunday: For example pony riding, visiting the playing trailers of the Rhenish State Youth and the exciting “Children’s Educational Trail”, which equipped with a stamp card involves the children discovering various stations.

And the social aspect also didn’t get a raw deal on Soers Sunday either. In the scope of the “Lucky Moments Campaign” charity cooperation, the four therapy centres from the region put in a show performance entitled “Vive la France – Therapeutic Riding in Aachen” for the public on the jumping practice area, whilst volunteers collected donations for the campaign all over the showgrounds. The Carnival Prince elected for 2020, Martin Speicher accompanied by his court, actively supported the campaign this year under the motto “All inKlusiVe!”. 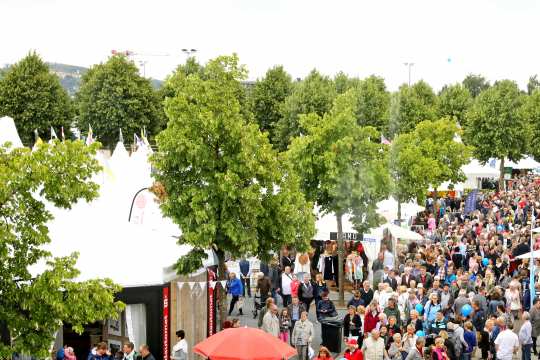