The British rider, Charlotte Fry clearly took the victory in the Prix St. Georges competition, the Prize of VUV-Vereinigte Unternehmerverbände Aachen in the Deutsche Bank Stadium with the just eight-year-old KWPN stallion, Glamourdale.

It was the 23-year-old British dressage rider, Charlotte Fry’s debut performance at the World Equestrian Festival in Aachen. Her premiere with the eight-year-old Glamourdale proved to be a total success. Placed first by all five judges with a total score of 77.971, she rode to victory in the Prix St. Georges, the Prize of the VUV-Vereinigte Unternehmerverbände Aachen, with ease. Second place went to the Dutch rider, Joyce Heuitink riding Gaudi Vita on a score of 72.471, followed by Hubertus Schmidt with Denoix PCH (70.588).

The victory was not totally unexpected as Charlotte Fry said: “I had hoped to win, because he is so incredible,” she beamed patting Glamourdale affectionately on the neck. What she felt like during her first appearance at the Soers? “The stadium is awesome, better than anything I have ever seen!”

Whereby Fry and her Lord Leatherdale son have already notched up plenty of great victories together. For instance, the British athlete, who lives in the Netherlands, claimed the World Championship title for the seven-year-old dressage horses with her black stallion last year in Ermelo. They are at home at the yard of van Olst, who also owns Glamourdale. Charlotte Fry learnt her dressage skills from the British master trainer, Carl Hester. 2018 was the most successful year in her career to-date. In addition to winning the world championship title in Ermelo, she also won gold in the freestyle competition at the U25 European Championships, albeit with Dark Legend, whom she has also brought to Aachen with her and whom she will be saddling tomorrow for the Nations Cup representing Great Britain. 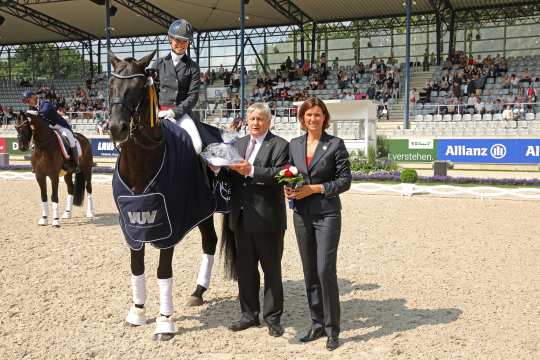 The winner is congratulated by Michael Mahr (CEO VUV - Vereinigte Unternehmerverbände Aachen) and Stefanie Peters (member of the ALRV board).