Party atmosphere at the Soers: Anyone, who approaches the Main Stadium on Sunday evening, July 21st, will be surprised. Because the spectators really get ecstatic during the Lavazza-Cup. The equally spectacular and fast-paced competition is an absolute crowd-puller.

Relay teams comprising of one show-jumper, one eventer and one four-in-hand driver – battle it out to see who crosses the finish line in the fastest overall time. The spectators let themselves get carried away by the speed, music and floodlights – it is one of the show’s true highlights. Lavazza is the official coffee partner of the CHIO Aachen.
And the athletes that have already confirmed their participation so far are the absolute super stars of their disciplines. Ingrid Klimke is always quick off the mark, she already asked at last year’s CHIO Aachen: “You are holding the Lavazza-Cup again next year aren’t you?“ So, of course she is competing in addition to Michael Jung and Andreas Ostholt from Germany, Belgium’s Karin Donckers and the two-time winner of the DHL Prize at the CHIO Aachen, Christopher Burton (AUS). The show-jumpers will be announcing their contestants soon, among others the four-time world champion, Boyd Exell, who simply introduces himself on his own website as the Champion of Champions, will be on board among the four-in-hand drivers. The top driver always wants to win. He has strong competition though from Chester Weber, Georg von Stein or Koos de Ronde.

However, ultimately the big question will be: Which team harmonises best? The Lavazza Cup in the Main Stadium of the CHIO Aachen on Saturday evening, July 21st, 2018 will deliver the answer. Tickets for the Lavazza-Cup are available here  and via the hotline on +49-(0)241-917-1111. 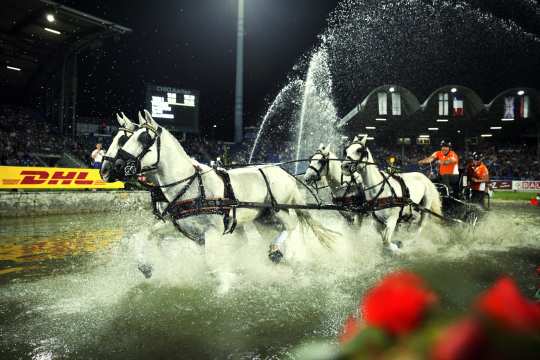