Team Germany II won the Nations’ Cup of the Vaulters in the Prize of Sparkasse, the first “international” at the CHIO Aachen 2017. A victory after a clear declaration!

The national coach of the vaulters, Ulla Ramge and her colleague Kai Vorberg, were able to sit back and relax today. The German teams were their own mutual biggest rivals in the Nations’ Cup of the Prize of Sparkasse. In the end, Germany II asserted themselves against Germany I. Kristina Boe, who represented the winning team as an individual vaulter, hit the nail on the head: “This year the teams were very even, which is why we already declared that we were going to fight hard yesterday.”

A statement that seems to have given Boe and her colleagues from Team Germany II, Janika Derks and RSV Neuss-Grimlinghausen, a further boost. All of the athletes were able to further improve their performances of the previous day. Janika Derks danced through her routine nimbly and with precision, totally in line with her motto “The life of a cat”. And Kristina Boe alias Rey out of Star Wars? Yes, the power was with her, when she completed her extremely difficult programme without a mistake and in perfect harmony with the music.

And then came RSV Neuss-Grimlighausen with “Alice in Wonderland”. Yesterday, the young team from Neuss that has only been working together for a year, were beaten by their local rivals from Rhineland, Team NORKA from VV Köln-Dünnwald. Today, the team performed as if they had been unleashed, they risked everything and won everything. The score from the judges: 9.035. World-class. With a total score of 26.608 Germany II left their fellow competitors from their own country trailing behind.

The judges really were spoilt for choice between excellent performances at the highest possible level of sport. The public voting sponsored by SAP demonstrated how difficult the jury’s task was. Sometimes the spectators, the majority of whom were experts, found the performances better, sometimes the judges.

Germany I also put in an absolutely convincing performance. Sarah Kay and Erik Oese, who represented Germany I as the individual vaulters, were able to outdo their performances of the day before. Team NORKA performed more spectacularly and athletically than ever before, but weren’t quite able to match yesterday’s score.  In the end, Germany II’s score on the display was 26.212, second place. “Yes, we are a little bit disappointed,” admitted Justin van Gerven, one of the four male vaulters of Team NORKA. “But at the end of the day, we still delivered a top performance and it was minor details that separated us.”

The words of the national coach, Ulla Ramge, may have consoled him: “All of them demonstrated that they have nerves of steel. The atmosphere here at the CHIO Aachen is incomparable to any other show in the world. Anyone who performs well here, performs well everywhere.” And everyone was good today!

The same also applies for the Italian team that finished third. They were represented by the individual vaulters Francesco Bortoletto and Anna Cavallaro and by Team C.I.M. Italy. Their overall score was 25.531.

This brought the first CHIO Aachen weekend to a close and the Show Director, Frank Kemperman, can be more than satisfied with the result – great sport, a sold-out stadium on both Saturday and Sunday, 30,000 visitors on the open day on “Soers Sunday” and two sold-out Horse and Symphony concerts. That whets our appetite for more over the coming days! 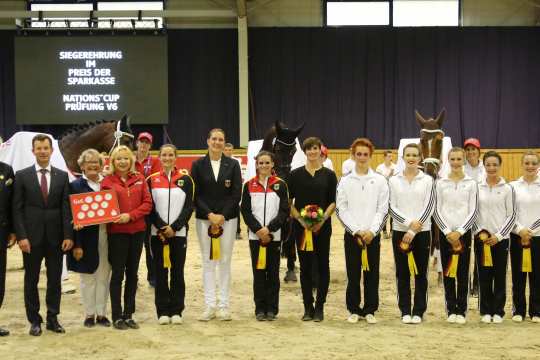