World-class at the Soers: The CHIO Aachen 2022

“Pooh.” On taking a look at the field of competitors at the CHIO Aachen, which begins on Friday and runs until July 3rd, the dressage superstar Isabell Werth was initially amazed. Before shedding a tear, albeit not because of her fellow competitors, but indeed because of an imminent farewell. Together with the organisers, the best rider of all time took a glance at the upcoming World Equestrian festival at lunchtime on Monday.

“It is no secret that I am a dressage fan,” said Stefanie Peters, delighted about the sports guest at the Press Conference. The President of the Aachen-Laurensberger Rennverein e.V. (ALRV), organisers of the event, is looking ahead to the best ten days of the year full of joy, “We are also sensing this immense sweet anticipation of finally being able to experience a CHIO Aachen that we all know and love again among the public.”

Michael Mronz, General Manager of the Aachener Reitturnier GmbH (ART) made it clear that this is not matter of course. “Great challenges lie ahead of us,” Mronz stated. He added that the equestrian sport is becoming continually more global and “in order to maintain the status of the CHIO Aachen and to strengthen its standing, it doesn’t just suffice to merely get through the Corona time,” instead we have had to continue investing. The most important future themes for the CHIO Aachen here are to expand the commitment for the youth and the integration of the para sport. The CHIO Aachen has also been extending the digital aspects of the CHIO Aachen for years, “we are inquisitive”, is how Mronz puts it. For example, this year there is going to be a new talk format, which is based on the data tracked together with SAP in the disciplines jumping, dressage and eventing. A CO2 footprint calculator is being integrated into the CHIO Aachen app and what’s more the Web 3.0 technology has also arrived at the traditional grounds at the Aachen Soers. Initial insights into the “CHIO AACHEN METAVERSE” were outlined during the press conference. The CHIO Aachen also profits from this: Parallel to the show, the “#neuland” Congress is being organised in Aachen, in the course of which around 100 top speakers will voice their opinions on the most urgent, present-day issues such as digitalisation and connected mobility. The focus of the second day: Sport and also the equestrian sport, here – in line with the future plans of the CHIO Aachen – the focus will lie on sustainability and equal opportunities – between men and women, but also for athletes with a disability.

And yet, the CHIO Aachen is and will remain to be above all one thing: World-class sport. Over ten days, in five disciplines, in front of 350,000 spectators, in the most famous equestrian sports arenas in the world. And once again in the year 2022, the best of the best have announced their participation, the fields of competitors read like the who’s who of international top sport. In the show jumping, 16 of the top 20 athletes in the world will be competing, led by the number one in the world ranking list, the Swiss show-jumper, Martin Fuchs, and the Olympic gold medallist from Great Britain, Ben Maher. Both are bringing their top horses with them, as is Germany’s current number one, Daniel Deußer, whose aim is to repeat his last year’s victory in the Rolex Grand Prix. After his triumph at “The Dutch Masters” in `s-Hertogenbosch, the Netherlands, Deußer is also travelling to Aachen as the contender for the “Rolex Grand Slam of Show Jumping”. “It is not going to be easy,” grinned Deußer, who tuned into the PC live. He is placing his bets on his mare “Killer Queen”, whom he rode to victory in Aachen in 2021 – “she feels quite at home in the huge stadium, so why not again this year,” Deußer commented.

The competition is very strong in the dressage too, as Isabell Werth is aware: “It’s a rare occurrence to have such an excellent field of competitors, it is going to be extremely difficult.” This is not only true for the individual classification, but also for the Lambertz Nations Cup. “We are going to have to watch out, the Danish team in particular is very strong,” Werth said looking forward to the upcoming competitions. She is the record holder in the Deutsche Bank Prize, the Grand Prix Freestyle on Sunday, however she considers Cathrine Dufour to be the clear favourite. The Danish rider is currently number two in the world ranking list and with the absence of Jessica von Bredow-Werndl, who is pregnant, she is generally considered to be the favourite to win. However, one never knows in Aachen, “the horses and riders have to first of all cope with the special atmosphere in the Deutsche Bank Stadium,” according to Werth, because “this atmosphere is unique all over the world.”

And then she actually shed the first tear – when it came down to the imminent retirement of her “soulmate horse” Bella Rose from competition sport. Bella will be celebrated at a gala in the Deutsche Bank Stadium on Friday evening, prior to which the pair will set off on their final round through the Main Stadium during the Opening Ceremony (28.6.). “That is going to be very emotional,” Werth stated. She said, sniffed and already needed a handkerchief during the press conference to wipe a few, early tears away.

The Show Director and ALRV Chairman, Frank Kemperman, is of course also delighted about the renowned field of competitors. “They are definitely world-class,” the Dutchman noted. And not just in the show jumping and dressage, the best of the best are also competing in the vaulting, four-in-hand driving and eventing competitions. For example, Germany’s Olympic gold medallist, Julia Krajewski; the SAP Cup winner of 2021, William Coleman (USA); the World Champion, Rosalind Canter (GBR) and the three-time SAP Cup winner, Ingrid Klimke (GER) will be taking part in the supreme three-leg discipline to claim the SAP Cup. Incidentally, Klimke is also in the dressage team (Kemperman: “We have never had a rider on the team in two disciplines before!”) is also taking part in the Opening Ceremony and in the spectacular CHIO Cup on Saturday evening. That is very versatile even for an eventer. 330 riders from 32 nations are awaited in Aachen, on top of that 967 horses and there are going to be 98 hours of sport in total. By the way, it is going to be the last CHIO for Kemperman in this function, he is joining the ALRV Supervisory Board in the autumn.

Aachen’s Mayoress, Sibylle Keupen, is looking forward to many guests from all over the globe, which the show always attracts to the former, imperial city. “The CHIO conjures up a smile on all of our faces and is the icing on top of Aachen’s wonderful cake,” the Mayoress stated.

Tickets are available from the hotline on +49-(0)241-917-1111) or via the CHIO Aachen website. Information on the event, on the shows and of course on the schedule can also be found there. 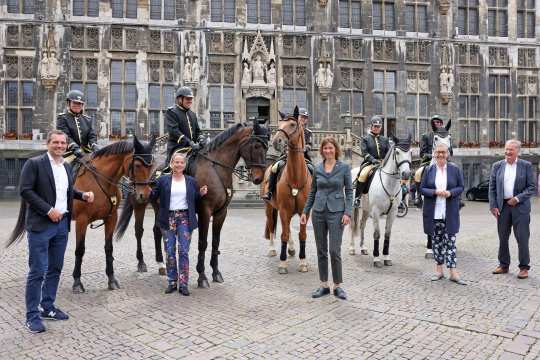