Bertram Allen has had a new horse for a few months: FTS Killossery Konfusion, comes like his rider from the green island, Ireland. The two of them are made for each other as their first international victory in the VBR-Prize today demonstrated.

Bertram Allen rode the eleven-year-old FTS Killossery Konfusion at a show for the first time at the beginning of July. The grey gelding has competed at several shows since. One can count the faults he picked up over this times on one hand, so the pair was well-prepared for Aachen and succeeded in leaving their 22 fellow competitors behind them today in the VBR-Prize. The pair came under the top three several times over the past weeks, but the venue they selected for heading the field in the lap of honour is the Aachen Soers.

The class is a 1.50-metre-high jumping class in two phases. Bertram Allen and FTS Killossery Konfusion were already one of the fastest pairs in the first phase and they also put their foot down in the second phase against the clock. They reached the finish line in 32.88 seconds, which was 0.43 seconds faster than the pair behind them. The Brazilian rider Bernardo Alves came second with Mosito van Het Hellehof in a time of 33.31 seconds. Third place went to the French show-jumper Laurent Goffinet with Absolut de Lacke, who took exactly 0.1 second longer to complete the course. 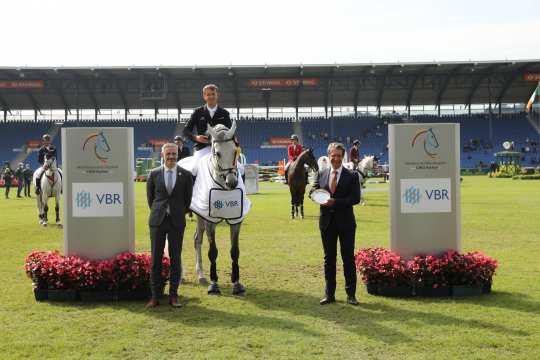