Two youngsters at the “Horse & Symphony”

The state stud and Alizée Froment are also on board

He has already played together with André Rieu, stood next to world famous singers – but having a horse right next to him his a new experience for the violinist Enzo Kok. The 15-year-old Dutch musician and the dressage rider Johanna Kullmann from Hamminkeln, who is one year younger, are among the stars at the “Horse & Symphony”, the spectacular concert at the CHIO Aachen.

Enzo is stood in the still empty Deutsche Bank Stadium, playing the world famous melody from Beethoven’s 9th symphony, the “Ode to Joy”. Johanna Kullmann is mounted on “Casino Royale”, the two of them attuned to one another very quickly during this rehearsal. And yet it will of course be totally different, when on Friday evening of July 13th, 6,000 people are seated here. But “the pleasure of being able to be part of it, will prevail,” said the young dressage rider. And that with the nervousness “I’ll get that sorted”. It certainly won’t be a flop because of lacking riding skills, Johanna has an exceptional year behind her. Among others, she won at the “Aachen Dressage Youngstars” and at the German Youth Championships.

Just 15 years old, Enzo Kok has long since been a true star. He took second place in the Sat1 show “Superkids”, he has already shared a stage with his big idol, André Rieu, but what’s more he is already allowed to study at the Music Conservatory in Amsterdam in spite of his young years. What motivates him? “Quite simply,” he answers, “I want to touch people with my music.” The stadium experience is not totally new for him, since he played in the Football Stadium at the Kerkrade Music Festival WMC last year. And he admitted that he is always nervous anyway. Whether he plays in front of 50 people or as at the “Horse & Symphony” in front of 6,000. “The butterflies are merely part and parcel of performing,” the virtuoso violinist commented.
It is always an exceptional atmosphere when the live music of the Aachen Symphony Orchestra meets fantastic equestrian sport. Apart from the music this is also due to the programme, which is going to be fast-paced, spectacular, atmospheric and magical this year, because the motto in the year 2018 is: “Mystical – fairytales, myths and heroes”.

In addition to Enzo Kok and Johanna Kullmann, the programme also includes Shetland ponies in front of the sulky as well as the proud Arabian horses from the Ismer Stud. The world-class vaulters from Team Neuss will be performing to “Alice in Wonderland” and there is going to be a draught horse quadrille by the Warendorf State Stud. The French star, Alizée Froment, has also confirmed her participation – accompanied on the piano by the conductor, Justus Thorau. 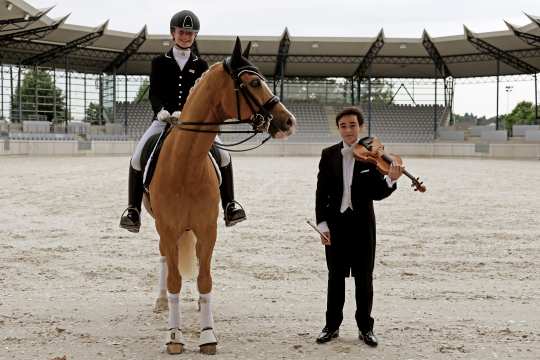