The Quadrille team from Neuss wins the Prize of Handwerk

The equestrian athletes from Neuss have been extremely successful at the CHIO 2017. After the vaulting group from RSV Neuss-Grimlinghausen won the Nations’ Cup last weekend, today the quartet from the Neuss District Club claimed the victory in the Aachen Quadrille Championships, the Prize of Handwerk.

Together with their team leader, Anja Mede, Kahra Alena Baumann with Dance with me, Kerstin Lehmann with Hermanito, Anke Roeb with Waldero‘s Dream and Sabrina Stocks with Filou le Bon were able to enjoy the unique opportunity of having the golden ribbon clipped onto their double bridles in the Deutsche Bank Stadium at the Aachen Soers. The judges awarded the team a total score of 17.5 points, 8.0 for the technical execution and a 9.5 for artistic performance.

Only two tenths of a point separated the winners from the runners-up. Second place went to the Krefeld District Club comprising of Christina Dahl/Las Vegas, Nicole Louven/Laurino, Angela Bißels/Faunus and Simone Weichert/Copyright, led by Tanja Liepack.

The result of the title holders, the Wesel District club under the aegis of Helmi Abeck was rather surprising. Abeck and her team are specialists in riding quadrilles. Last year the riding instructress admitted that she can’t remember how often they had won the Prize of Handwerk at the CHIO. This time they had to make do with fourth place after finishing on a score of 16.2 points. In 2018 they will no doubt be after a revenge! 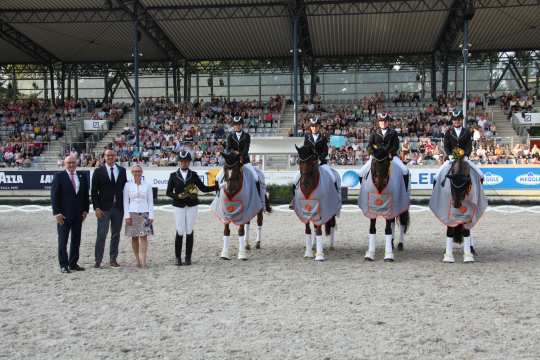