The most spectacular show of the year

Horse & Symphony: The Aachen Symphony Orchestra meets Equestrian Show - State Studs and Japan are the centre of attention on September 9th and 10th.

When outstanding music is united with an exceptional show, it has to be “Horse and Symphony” time at the CHIO Aachen. The concert on September 10th and 11th focuses on the state studs and this year’s partner country, Japan.

The atmosphere is unique when the sun goes down in the Deutsche Bank Stadium. Classic equestrian art meets classic instruments, selected equestrian athletes and show stars meet the fantastic live music of the Aachen Symphony Orchestra. A foretaste of the most extraordinary concert of the year is available in the middle of Aachen: The CHIO mascot Karli took to the dancefloor to the music of the Symphony Orchestra. When the orchestra then performs during the “Horse and Symphony” show, above all the four-legged stars will impress the crowd, but of course plenty of two-legged protagonists are also on board. It is going to be more diversified than ever! The music promises some of the most popular melodies of classic history: From Shostakovich’s “Waltz No. 2” to Edvard Grieg’s “Peer Gynt Suite”, extracts from “The Nutcracker Suite” and “The Bat Quadrille”, Strauss melodies through to the modern, but equally impressive “Palladio” by Karl Jenkins. As a tribute to the partner country Japan, the orchestra will among others also play music from the film “Memoirs of a Geisha”. The show performances focus on Japan and the German state studs. From Celle to Warendorf through to Marbach – each is unique in its own way and yet they still all have one thing in common: They preserve the cultural asset, the horse, in its full spectrum. Which ranges from the “Hungarian Post” to various quadrilles and carriages through to the “Silver Herd”. This is all going to be complemented by the teams of the international Grand Prix rider Britta Rasche-Merkt and the dancers of the Ferberberg Ballet School. Also part of the show in the Deutsche Bank Stadium: Janika Derks and Johannes Kay, the new vaulting World Champions.

Christopher Ward, Chief Musical Director of the City of Aachen, will be conducting on the evenings of September 10th and 11th. The first notes of the so popular format that has been a fixed element of the World Equestrian Festival since 2003 will sound out under the baton of the conductor from London at 8.30 p.m. The interplay between the orchestra and the individual show acts fascinates both the spectators and the participants alike: “Every second counts at the Horse and Symphony. It is really special when the music accentuates a movement, a dance or a certain speed perfectly,” explained Ward. The Show Director, Frank Kemperman, is already convinced: “It is going to be unique.”

There are still remaining tickets for both dates. 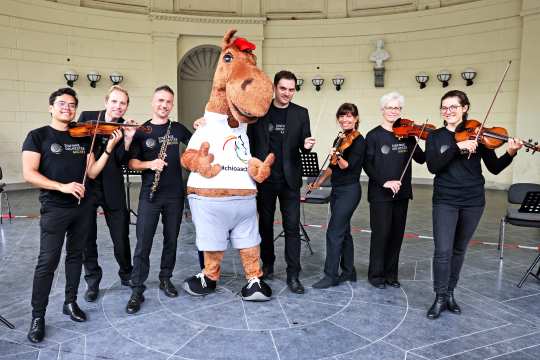