At the end, the Aachen crowd bid farewell to their General Music Director in the appropriate Aachen fashion: Waving a hanky to the sound of “Muss I denn…”.

The “Horse & Symphony” concert at the CHIO Aachen on Saturday evening was the final performance of the General Music Director Kazem Abdullah as conductor of the Aachen Symphony Orchestra before his ultimate departure from Aachen.

And what a farewell it was! The conductor didn’t simply leave the podium for his dressing room as usual, he did a lap of honour through the arena riding in a carriage pulled by four magnificent grey horses. “Muss I den” rang through the traditional showgrounds a week earlier than usual and more than 6,000 people in the sold-out Deutsche Bank Stadium waved goodbye to him with white handkerchiefs.

“All of those people waving their hankies, that really moved me. The organisers brought forward a Farewell of the Nations ceremony especially for me, what an honour and a huge gesture,” said a visibly moved Kazem Abdullah in his dressing room underneath the Deutsche Bank Stadium afterwards. “Your passion is music, our passion is horses – in the scope of the Horse & Symphony concert we unite the two in a wonderful way.” Frank Kemperman, Chairman of the Aachen-Laurensberger Rennverein (ALRV) and ALRV President Carl Meulenbergh bid a hearty farewell to Abdullah, who thanked them just as warmly: “The farewell this evening was incredible and wonderful. I am very fond of this city, its inhabitants and fantastic events like the CHIO. I am very proud that I had the honour of being part of the CHIO Aachen for the past 5 years in the scope of the “Horse & Symphony”.”

He can still recall his early days at the Soers very well: “I can remember how it was when I first heard about the ‘Horse & Symphony’: What’s that then, I asked myself. With horses? Sounds cool. This evening my sincere gratitude goes to Frank Kemperman and Carl Meulenbergh and the entire fantastic team of the CHIO Aachen for this magnificent and moving farewell.”

He already has plans for the coming months. First of all he is going to enjoy the CHIO Aachen 2017: “I will watch many of the competitions and also attend the Media Night on Tuesday evening.” Kazem Abdullah is staying in Aachen until the end of July, then he is travelling to the USA first of all before moving to Nuremberg in August. This is where his new base is going to be, “but I will be travelling a lot. For example, several guest performances in the USA have been agreed, for instance in Miami, South Carolina and New York. I already have a lot of commitments, so I will be very busy initially.”

And right at the end he promised to at least remain loyal to the World Equestrian Festival as a visitor: “Perhaps we will meet up again at the CHIO 2018, it is so wonderful here.”

Here is the (Mobile-) Video 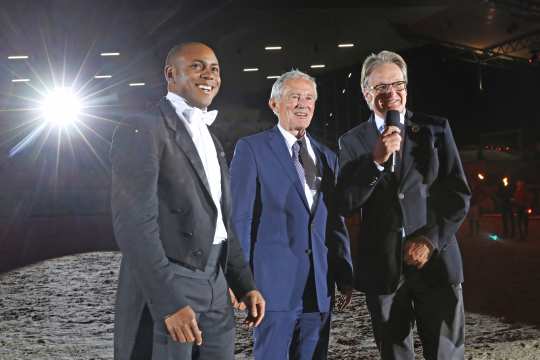