Terri Miller’s photographs are almost like paintings. She plays with the light, takes them from unusual angles and often lends her pictures a touch of poesy.

That might be because the US American is not only an excellent photographer, but also a passionate painter. And on top of that also a rider. Even if she hardly gets the chance to sit on a horse in the meantime.
Her exceptional talent is also tangible on the photo that was distinguished with the “Silver Camera” during the CHIO Aachen. The photo that shows Anna Buffini and Wilton II at the West Coast Dressage Festival almost has a mystical effect. And it now carries the title “Best international equestrian photo of the year 2018”.

103 photos were submitted this year by photographers from all over the world. In advance the jury comprising of Janika Sprunger (show-jumper, Switzerland), Henrik von Eckermann (show-jumper, Sweden), Eric Knoll (photographer and previous year winner, France), Andreas Müller (Managing Director, Medienhaus Aachen, Germany) and the ALRV Chairman and CHIO Aachen Show Director Frank Kemperman (the Netherlands), nominated the best three photographs. The photo of Terri Miller convinced the jury across the board.

Second place went to France, namely to the photographer Christophe Bricot with his extraordinary picture of Henrik von Eckermann “flying” over the Rolex obstacles with Castello during the CHIO Aachen 2018. Third place also went to an overjoyed US American: Ashley Neuhof captured Simone Blum with her successful horse, Alice, celebrating her triumph at the World Equestrian Games in Tryon, where she won individual gold after a fantastic round.

The prize was presented on Saturday evening by the ALRV Supervisory Board Member, Wolfgang ‘Tim’ Hammer. The winner receives 2,500 Euros, second place picks up 1,000 Euros and third place wins 500 Euros. 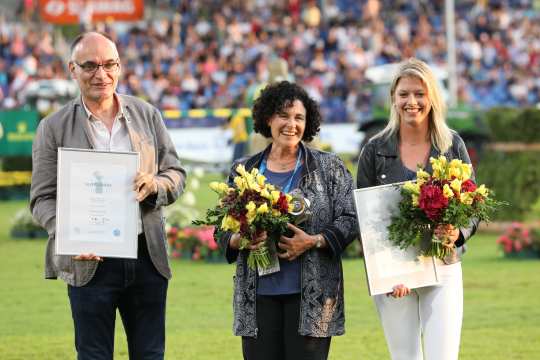