Philipp Weishaupt and Lacasino were the fastest pair this afternoon in the STAWAG Prize, a penalties and time jumping competition. As Weishaupt stated, thanks to his colleagues Marco Kutscher and Christian Kukuk.

Lacasino has been stabled in Beerbaum’s yard for some time already. He already notched up plenty of victories with Marco Kutscher and Christian Kukuk. But Philipp Weishaupt has only been riding the 13-year-old Lordanos son for a few days. Aachen was only the pair’s second show and nevertheless they still managed to reach the finish line a good two seconds faster than the rest of the field in the STAWAG Prize. They sped to victory in a time of 67.78 seconds. Weishaupt: “Lacasino made it easy for me today.” And with a wink: “My colleagues have done some fantastic groundwork!”

Shortly before making his debut for Germany in the Mercedes-Benz Nations Cup, David Will secured himself second place with the nine-year-old Wuerttemberg-bred mare, Concordia, a daughter of Will’s first top horse, Colorit. The clock stopped dead on 70 seconds.

Lorenzo de Luca and the BWP-bred mare, Malissa de Muze by Vigo d’Arsouilles picked up third place for Italy with a time of 70.43 seconds. 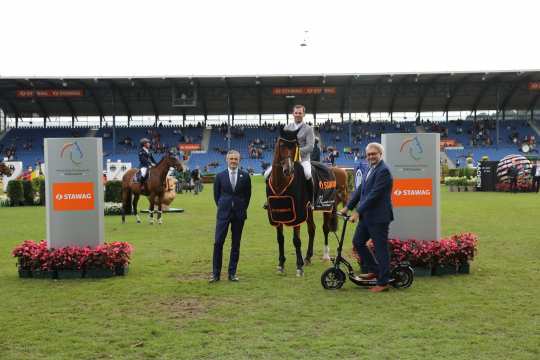 From left: ALRV Supervisory Board member Dr. Thomas Förl and Wilfried Ullrich, STAWAG Board of Management, congratulate the winner.