Drums, Dragons and Ying and Yang

CHIO Aachen – that is a synonym for world-class equestrian sport, but also long since for exceptional entertainment. For three years already the traditional Opening Ceremony has been presenting itself as a perfect entertainment show in the Main Stadium, lasting 90 minutes, spectacular and floodlit.

So it is no wonder that Carl Meulenbergh, President of the Aachen-Laurensberger Rennverein e.V. (ALRV), organisers of the event, on introducing this year’s programme this Friday morning, promised: “Once again in 2018 we are going to experience a fantastic show.” It is not without reason that the organisers chose the Roncalli tent palace, which is currently erected on the CHIO Aachen grounds, as the location to present the initial contents of the Opening Ceremony (July 17th, 2018 at 8 p.m.): Because this year the country theme is China, a country that stands for a long circus tradition. For example, on Friday artists from the Chinese national circus performed in the ring.

According to the ALRV Chairman, Frank Kemperman, two reasons played a decisive role here: On the one hand, one chose to leave the borders of Europe again after having Brazil as the partner country in 2012 and on the other hand the CHIO organisers have maintained close relations to China for many years. Among other things, the CHIO team has been co-organiser of an equestrian event at the Bird’s Nest, the Olympic Stadium in Peking, since 2012. “It is logical that against this personal background the idea of working together with China cropped up again and again,” stated Kemperman.

In addition to the artists from the national circus, a colourful, magnificent and spectacular show awaits the visitors. The lion and dragon dance is inseparably associated with the Chinese culture. Kemperman also announced a real cracker: “Manao – Drums of China”. The 12 young ladies already opened the Olympic Games in Peking with their tremendous drums. It is certainly going to be exciting to see how Kemperman’s team, together with Birgit Rosenberg, who is also responsible for the show programme in her capacity as Director of the Sports Department and Uwe Brandt – the Theatre Manager of the Aachen Grenzlandtheater who has been supporting the team for years with the choreography, dramaturgy and staging of the show – present major Chinese themes such as the Terracotta Army or Ying and Yang with hundreds of horses and extras. Because countless extras are needed to fill the huge arena in Aachen.

Kemperman is particularly looking forward to the participation of the large Chinese community in Aachen: “In particular many students and school children will be taking part in the show,” the Chairman revealed. Tickets are still available online and from the hotline: +49(0)241-917-1111. Of course, we are hoping the stadium will be sold-out like last year: “This special atmosphere, floodlights, a full house – that is a true highlight for me.” Incidentally, the Opening Ceremony, which will be broadcast live on WDR, will also be brought to a typically Chinese close: With a gigantic firework display.

“Once again in 2018 we are going to experience a fantastic show.” 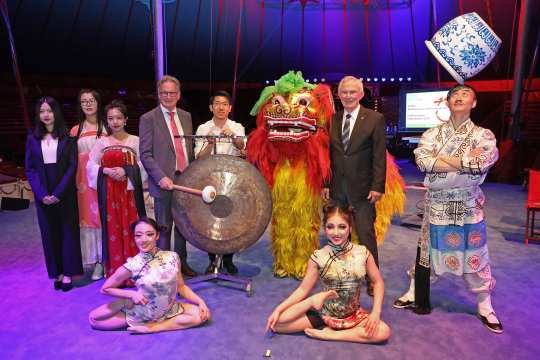 The ALRV President Carl Meulenbergh (2nd f.t.r.) and the Chairman, Frank Kemperman (5th f.t.l.), are looking forward to Chinese tradition and culture. They presented the agenda for the Opening Ceremony of this year’s CHIO Aachen together with artists from the Chinese national circus, members of the Chinese Traditional Association of Chinese Scientists and Students Aachen” and the musician Liang Dong . Photo: CHIO Aachen/Andreas Steindl