Nominations for the “Silver Camera”

Which is the best equestrian sport photo of the year?

An extraordinary angle, an emotional moment and the whole dynamics of the sport: The jury has nominated three special photographs – one of them will be elected as the best equestrian sport photo of the year during the CHIO Aachen 2018.

And one thing is already clear: The winner of the “Silver Camera 2018” comes from either France or Germany. Because the jury nominated (in alphabetical order):

The winner will be announced on Saturday evening, July 21st, 2018, in the Main Stadium of the CHIO Aachen. In addition to the honorary “Silver Camera” prize, the winner receives prize-money to the value of 2,500 Euros. Second place is endowed with prize-money to the value of 1,000 Euros and 1,000 Euros is awarded for third place. The prize for the best international equestrian sport photo of the year is conferred jointly by the Sparkasse Aachen, the Rheinische Sparkassen- and Giroverband and the Aachen-Laurensberger Rennverein e.V. (ALRV). The jury comprising of Juan Matute Guimón (dressage rider, Spain), Andreas Müller (Managing Director Zeitungsverlag Aachen), Erich Timmermanns (Director Advertising & PR Sparkasse Aachen), photographer Michael Strauch and the ALRV Chairman Frank Kemperman – selected the nominees from 115 entries. 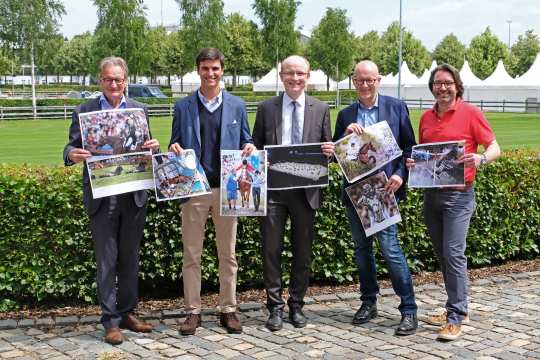