Marcus Ehning’s performance today in the Rolex Grand Prix at the CHIO Aachen 2018 wasn’t just the ride to victory. It was a demonstration of wonderful show jumping, fantastic advertising for the equestrian sport and also to an extent due to the support of the “best crowd in the world” as Ehning described the Aachen spectators.


Eleven of the 40 pairs on the starting list for the Rolex Grand Prix 2018 were German. Three of them made it into the second round: the Rolex Grand Prix winning pair from 2016, Philipp Weishaupt and L.B. Convall; as well as the Nations Cup heroes Marcus Ehning with Pret a Tout and Maurice Tebbel with Chacco’s Son. Marcus Ehning had to go first and delivered an exemplary stylistic clear round. Philipp Weishaupt and Convall had an annoying mistake in the first third of the course. Maurice Tebbel with Chacco’s Son had a perfect round and it looked like they were going to be the sixth pair to qualify for the jump-off. But unfortunately Tebbel made the wrong decision at the last obstacle, is how the national coach, Otto Becker, analysed the situation afterwards. His stallion came to close to the fence and the pole fell. The Rolex dream was over.

That meant there were only five left in the jump-off. Besides Ehning, whose last victory in the Grand Prix of Aachen was twelve years ago, the Irish rider Darragh Kenny with Babalou; the Brazilian show-jumper Pedro Veniss with Quabri de L’Isle; the Swiss Olympic gold medallist Steve Guerdat with Bianca and the pair that came second last year Luciana Diniz with Fit For Fun. Darragh Kenny’s Oldenburg-bred Balou du Rouet daughter, Babalou, had saved her rider in the double combination in the second round when he misjudged the distance and the mare proved that she had got extremely swift legs and managed to save herself over the fences. But in the jump-off her strength seemed to ebb: 12 faults.

Pedro Veniss and Quabri de L’Isle travelled to the CHIO Aachen 2017 as the contenders for the Rolex Grand Slam after their victory in the Rolex Major in Geneva in 2016. However, they weren’t able to compete in the Grand Prix, because the stallion sustained an injury during the show. Now they were actually in the jump-off and had the chance to take up the challenge of the Grand Slam again. And indeed, they jumped clear in a time of 41.62 seconds. A time that could be beaten, couldn’t it? Around one minute later Marcus Ehning and Pret  a Tout answered that question.

The pair were greeted by emphatic, rhythmic applause from the crowd. This might have helped towards the subsequent victory, because as Marcus Ehning revealed later, Pret a Tout loves the attention: “When he enters the ring and hears the crowd it gives him additional motivation.” It certainly worked. Ehning and the 15-year-old Selle Français gelding Pret a Tout cruised over the jump-off course with ease – in Ehning style so to say: Not exciteement, no pulling, no tugging, simply a fast gallop along the shortest routes. The clock stopped at 38.34 seconds. But the competition still wasn’t decided.

After all, the Olympic gold medallist, Steve Guerdat, always rides to win. And his Swedish-bred Balou du Rouet daughter Bianca (Balou du Rouet may have even more mares to cover next season) is a fast horse. However, at the third oxer the mare got a pole between her legs and this took away a bit of her confidence over the remaining obstacles. Two more poles fell.

Then it was the turn of Luciana Diniz and Fit For Fun. It is part of the pair’s ritual that they enter the ring in walk on a long rein. A last moment of quiet and concentration. They had already finished second last year. This time they wanted to take the victory. Luciana Diniz: “I saw Marcus ride and decided to follow the same plan.” It worked to an extent. Diniz and her small jumping wonder rode clear, but with the clock stopping at 40.96 seconds they weren’t able to match Pret a Tout’s time. Diniz took it bravely: “I am very happy about finishing second. And it gives me motivation to keep trying.”

A victory for eternity

And Marcus Ehning? He now has something to tell his grandchildren: “That is something that is eternal!” He once again proved that he is a true horseman: “First of all I have to thank my horse. He has an incredibly good nature and knows his job!” Normally, the successful athlete then thanks the sponsor, because thanks to them Marcus Ehning is taking 330,000 Euros home with him. He did actually do that, but admitted: “I am in two minds here. On the one hand I am very grateful to Rolex that they make this fantastic competition possible. On the other hand, the poles on the Rolex obstacles fall down far too easily!” The next time he can try his luck at the green/yellow obstacles will be at the end of September in Spruce Meadows when he is to compete as the new contender for the Rolex Grand Slam. He hadn’t actually planned to compete in Calgary, so he will have to replan things. But there’s time for that later. Today he is first going to enjoy this victory after a CHIO Aachen with 362,000 spectators in total and fantastic sport.

There was one person among the 40,000 people, who were delighted at Marcus Ehning’s victory today, who particularly cheered him on: The national coach, Otto Becker. “I am so happy for Marcus! He is incredibly important for the team and was a key member on Thursday,” he said referring to the victory in the Mercedes-Benz Nations Cup (the third in a row, each time with Marcus Ehning and Pret a Tout on the team). “He also manages the horses brilliantly!”

Some people were allegedly talking about a crisis on the German jumping sport scene prior to Aachen. Otto Becker: “The crisis can continue!” For instance, in Spruce Meadows at the next Rolex Major. 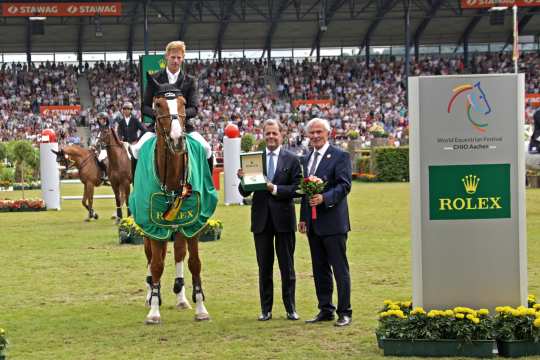