The World Equestrian Festival, CHIO Aachen, traditionally kicks off with the vaulting. Today, awarding the first rosettes in the Prize of Sparkasse was on the agenda. The best groups, ladies and men were sought after and found.

The first national anthem was played at the CHIO Aachen 2021 for the best vaulting group in the Prize of Sparkasse. Once again for Team Fredenbeck. The group from Lower Saxony travelled to the Soers as the defending title holders and recently crowned World Champions. A status that they did full justice to in the circle in the Albert-Vahle Arena. Topping the ranks in both the compulsory test and the freestyle with a final score of 8.356, they asserted themselves on the Oldenburg-bred gelding Capitain Claus against Team Norka from VV Köln-Dünnwald, who finished second on a score of 8.156. The team from Denmark, BIS 1, finished third with a score of 7.531.
Even if they had just claimed the World Championship title, running into the arena in Aachen is always something very special, the group from Fredenbeck stated. Team member Kathrin Meyer: “The fans who weren’t able to attend the World Championships are here today.” And these fans celebrated their favourite team. The motto of the group, that performed in rainbow-coloured outfits: “Unleash yourself”. The lunger, Gesa Bührig, explained: “Within the group we have so many different characters, but nevertheless we still work very well together. We want to show that each team member can live out his/her personality.” Fredenbeck is also well-known for always delivering a message with a deep meaning.

“Red material” fascination
Janika Derks pulled it off again. After 2017 and 2019, she secured herself the individual ladies title in the Prize of Sparkasse for the third time. The 31-year-old physiotherapist from Cologne performed a freestyle routine on the motto “Red material” on the 18-year-old old hand, Dark Beluga lunged by Barbara Rosiny. “I wanted to thematise the enfolding of energy,” she explained. And this can certainly be said for her. Above all her strength exercises are impressive, for example how she pushes up into a handstand seemingly effortlessly. The judges rewarded her with a total score of 8.619 in the freestyle. Added to the results from the compulsory and technical tests, her final score was 8.462 giving her a clear lead ahead of her former colleague from the Neuss club, Pauline Riedl on William II Z lunged by Maik Husmann (7.855). Alina Roß came third with DSP San Zero, lunged by Marion Schulze (7.628).

First victory for Jannik Heiland
Jannik Heiland knows what it is like to win in Aachen. He was able to enjoy the feeling already in the morning when he did a lap of honour for the victory in the group competition with Team Fredenbeck. But he hadn’t managed to walk off with the victory in the individual classification before. Until today. After leaving the four-time Aachen winner Thomas Brüsewitz behind him in the compulsory and technical tests yesterday, coming second in the freestyle competition today sufficed for him to pick up the overall victory. But it was very close! A total score of 8.487 for Heiland, 8.465 for Brüsewitz, who made it a nail-biting affair after performing a fantastic freestyle routine on Eyecatcher, lunged by Alexandra Knauf.

Incidentally, Jannik Heiland vaulted on Dark Beluga, who had previously cantered to victory with Janika Derks. “There is no horse more reliable than him,” raved Heiland. He wasn’t so happy with himself today though: “I was 90 to 95 percent satisfied today.” A perfectionist perhaps? “One has to be. Not too much, otherwise it is no fun. But one always has to see where one can improve slightly, especially at the moment when the competition in the men’s classification is tougher than ever before.” The competition in Aachen mainly came from his own camp. Namely behind Thomas Brüsewitz, the rankings from third to fifth place were all occupied by German vaulters: Julian Wilfling (7.909), followed by Jannis Drewell (7.669) and Thomas Heppler (7.637).

Pas de Deux, Part I
The pairs of the Pas de Deux got the day in the Albert-Vahle Arena off to a start this morning with the first of their two freestyle routines. Here, the World Champions, Janika Derks and Johannes Kay on Humphrey Bogart OLD with Nina Vorberg on the lunge, were simply unbeatable. They are currently in the lead in the overall classification on a score of 8.847. Second and third place also went to Germany: to Chiara Congia and Justin van Gerven with Highlight, lunged by Alexandra Knauf (8.697), and to Jolina Ossenberg-Engels and Timo Gerdes with Caramoe and Claudia Döller-Ossenberg-Engels on the lunge (8.506). 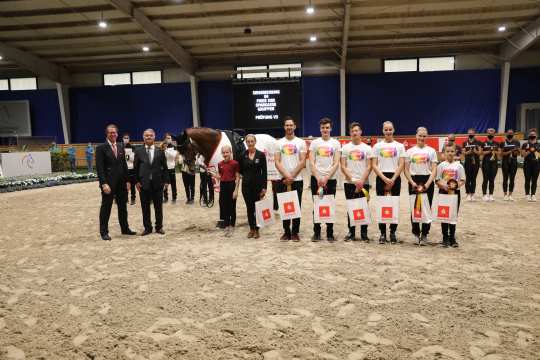 Thomas Salz, Member of the Board of Sparkasse Aachen, and Peter Weinberg, Member of the ALRV Supervisory Board, congratulate the winning Team Fredenbeck. 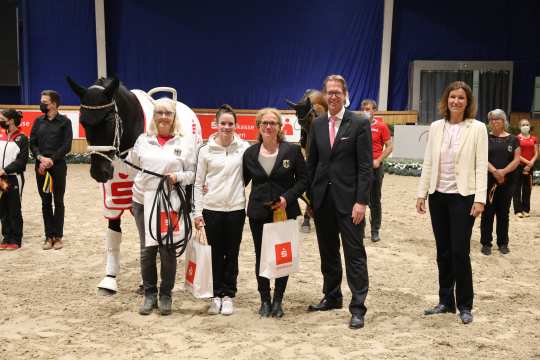 Janika Derks is happy about her victory, Thomas Salz, Member of the Board of Sparkasse Aachen, and ALRV President Stefanie Peters congratulate. 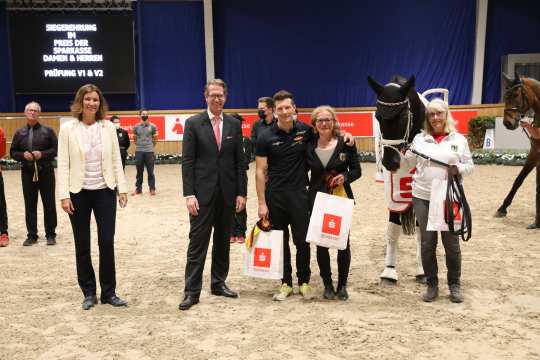