Prize of Sparkasse – when the Albert-Vahle Arena rocks

The Albert-Vahle Arena rocked, the national coach was moved and the vaulters were overjoyed – the Nations Cup really was a crowning conclusion to the Prize of Sparkasse at the CHIO Aachen 2022. And two team members had twofold reason for joy.

What a day in the Albert-Vahle Arena. The Nations Cup in the Prize of Sparkasse is traditionally a highlight. There wasn’t a spare seat in the stand. As the newcomer Kathrin Meyer jogged into the ring next to her mother Sonja Meyer and San Classico on the lunge, the crowd applauded ecstatically. And then even more so, when the group world champion of last year was awarded a score just under 9.0 (8.957) for her very first appearance as individual vaulter here at the Soers. Julian Wilfling followed next with Aragorn lunged by Alexander Zebrak as Don Quichotte: 8.932. Then it was the group’s turn: VV Ingelsberg, who came second in the Freestyle yesterday and third in the overall classification of the Prize of Sparkasse. The motto of their freestyle routine? “As long as it rocks!” And it did. One firework followed the next and the judges lit the last rocket by awarding a score of 8.871. That meant a combined score of 26.760 point. A strong performance by Germany 2. Whether Team 1 would be able to top that?

The four-time individual winner in Aachen, Thomas Brüsewitz and Eyecatcher, lunged by Alexandra Knauf was the first to go and he was awarded an overall score of 8.918. That was super – but less than what the two individual vaulters of Team Germany 2 had achieved. The next to go was Jannik Heiland, last year’s winner in the individual classification, who, dressed as a fish, vaulted on Rockemotion, lunged by Nina Vorberg. Heiland gave the performance of his life. His score of 9.116 speaks for itself. That meant the two team were more or less equal. So, everything was now down to the performance of Team Norka Automation from VV Köln-Dünnwald with Calidor lunged by Patric Looser. They topped the ranks yesterday. But Looser had explained that they hadn’t actually shown their full potential. They had struggled with the fact that Calidor hadn’t been fresh enough.

That certainly wasn’t the case today. Perhaps the frenetic applause of the crowd brought the Holstein-bred Calido-son to life. In any case, he carried his vaulters perfectly today and they celebrated a freestyle routine that one rarely experiences. Lifts, jumps, somersaults – everything went smoothly. The national coach, Ulla Ramge, was impressed: “It was a joy to watch!” Even the unbiased spectators on the stands were of the same opinion. Hence, achieving a total score of 27.390 Team Germany 1 asserted itself against Team Germany 2 (26.760), ahead of the Swiss team comprising of the individual vaulters Nadja Büttiker and Lukas Heppler and Group Ludwigsburg (25.533).

Ulla Ramges’ conclusion: “I am totally happy! And I am very proud of the two teams and our horses. The performance of our horses, how they fought for us, they know when it comes down to it too. They cut a fantastic figure.”

It was a very special day for Ulla Ramge today, because it was the last time that she accompanied “her” vaulters to the Soers as the national coach. She is stepping down as national coach next year. “That didn’t hardly play a role the whole time, because one is so busy here. But during the prize-giving ceremony I got rather sentimental, because Aachen is really something special. And the fact that this is the last time I am going to be the national coach, evoked great emotions in me.”

Especially since she could not only be proud of her Nations Cup team today, but also of the Pas de Deux pairs. Namely, Justin van Gerven and Chiara Congia – who incidentally also made up part of the victorious Nations Cup team Germany 1 – won the latter with Eyecatcher lunged by Alexandra Knauf on a final score of 8.820, ahead of a further German duo: Diana Harwardt and Peter Künne with Sir Laulau (lunged by Hendrik Falk/8.572). Third place went to the Dutch pair, Sam Dos Santos and Elise van de Ven with Doemaar, lunged by Jinte van der Heijden (8.101). Germany’s third pair, Timo Gerdes and Jolina Ossenberg-Engels, danced into fourth place with Cairo, lunged by Claudia Döller-Ossenberg-Engels (7.923). 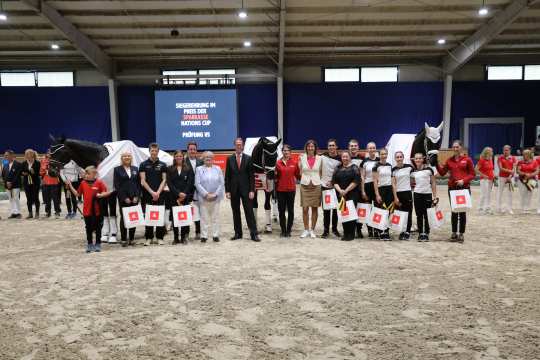 The winning team is congratulated by Thomas Salz, Member of the Board of Sparkasse Aachen, as well as Stefanie Peters, President of the ALRV Supervisory Board and Heidi van Thiel from the German Equestrian Federation. Photo: CHIO Aachen/ Michael Strauch