An exciting finale in the team classification of the FEI Youth Equestrian Games 2022. The quintet from North America wins the jump-off, ahead of Europe and Africa.

The years between the two Olympic Summer Games are normally reserved for the Youth Olympic Games (YOG). However, due to the Corona pandemic, the Games that were supposed to take place this year were postponed until 2026. This would have also affected the equestrian competitions. However, so that a whole generation of riders didn’t miss out on the opportunity to participate at a Games (the upper age limit is 18), the World Equestrian Federation, the FEI, offered to stage a replacement tournament. With no further ado, the YOG became the YEG, the Youth Equestrian Games, and the CHIO Aachen host of the event. 30 youths from six different continents competed at the Aachen Soers today on carefully selected horses they had been allocated by draw. And they put in fantastic performances!

After the first round, no less than four teams still hadn’t picked up any faults and were on course for gold. On the second day, during the second round, Aachen demonstrated how unpredictable the weather can be. After hours of pleasant sunshine during the day, the skies suddenly opened. However, that didn’t put the Youth Equestrian Games riders off at all. After Round Two, three teams still had a clean sheet, which meant each team had to send a rider into a jump-off.

North America opted for the highly-experienced Mimi Gochman (17) from the USA, who already competes at 4* Grand Prix level. She jumped clear in the fastest time of 32.26 seconds with her ‘professor’, Merino van de Achterhoek, to snatch up the victory for her team. The British rider, Claudia Moore, represented Europe in the jump-off with Largo van de Molenhoek. She also jumped clear but took fractionally longer to finish the course (32.59). Riding for Morocco, Jad Guerraoui also put in a clear round with Lady Angeles – but with a time of just over 33 seconds, which meant bronze for Africa.

All of the participants were overjoyed about their “Aachen” experience. “We came here and didn’t know each other,” said Haya Osama El Borai from Jordan. “But now we have become one.” And they all celebrated together afterwards just like a big family – with a traditional bath in the water ditch. After all, they were already soaking wet from the rain anyway…

The final of the individual classification commences at 1.15 p.m. on Saturday. 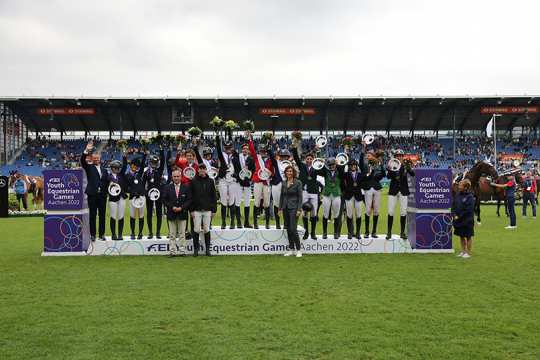