The US American dressage rider, Laura Graves, came to Aachen with a clear goal in mind: To win. She succeeded in doing so at the first attempt in the Grand Prix of the Prize of the Tesch Family – however her most fierce opponent and constant rival, Isabell Werth, clearly underperformed today. That certainly is going to add an extra touch of excitement to the Lambertz Nations Cup of the dressage riders, which today’s Grand Prix formed the first part of.

The judges awarded Laura Graves a score of 80.606 percent for her performance in the Grand Prix, Prize of the Tesch Family, with the Florett As son, Verdades. A super result and the clear lead. However, Laura Graves had to wait until the last pair before she could celebrate her victory. Because the last pair to compete were Isabell Werth and Emilio. The Westphalian-bred gelding had to fill in for Werth’s World Cup winner, Weihegold, a decision that the German Dressage Committee took in view of the World Equestrian Games in Tryon. After all as is commonly know: Anyone, who survives in Aachen, will survive anywhere. If he survives…

Namely, Isabell Werth’s Emilio didn’t play along at all today, like he usually does. In the first piaffe he wanted to demonstrate that he also masters the exercises of the High School and tried to rear. Isabell Werth coped well with that thanks to all the experience she has gained after winning 595 national and international Grand Prix with 27 horses. But Emilio didn’t calm down. Diverse further mistakes followed, which ultimately led to a final score of 72.516 percent. Nobody had reckoned with that. And nobody could explain it either. Isabell Werth: “I don’t know what happened. I will have to sleep on that one first. One certainly envisages something totally different for the Nations Cup in Aachen…”

One thing is sure: Laura Graves and Verdades rode to victory in the Prize of the Tesch Family at the CHIO Aachen for the first time in their careers!

Isabell Werth and Emilio finished in 17th place in the Grand Prix. Second place went to the bronze medallist of the European Championships Cathrine Dufour with her Caprimond son, Cassidy (78.494 percent). Although she also had a big slip-up when the 15-year-old gelding spooked after the transition from collected walk to passage and leaped forward. But luckily he found his concentration immediately again. “Otherwise the test went very well for us,” she stressed later.

Third place could almost be described as a wonder of Aachen: Helen Langehanenberg gave birth to her second daughter, Finja, just four weeks ago. A few days later she announced that she intended to ride in Aachen. She had already mentioned the plan in the spring in Neumünster during the World Cup show – adding: “But it will have to be a precision landing.” Her daughter Finja obliged. Langehanenberg mounted her team European Champion, Damsey, just five days later. During the rider’s maternity leave her “super team” kept him fit so he hadn’t forgotten a trick. So much so that on Friday the national coach Monica Theodorescu rang Helen Langehanenberg and told her that she had been nominated for the team in the Lambertz Nations Cup instead of competing in the CDI4* Tour. “I couldn’t breathe for the first three seconds,” recounted Helen Langehanenberg. But nerves have never been a problem for her: “I am not the type who gets nervous. And I can’t do any better than ride well.” Which is exactly what she did today – 77.034 percent was a personal Aachen record for her and Damsey in the Grand Prix. Monica Theodorescu commented: “I can’t really say, because I have never given birth to a child, but that she rode that well is amazing!”

Fourth place went to Jessica von Bredow-Werndl with the Aachen debutant, Dalera BB (76.848). It was only the sixth Grand Prix in the eleven-year-old Trakehner mare’s career. And the matter of course way she presented herself here in Aachen even amazed her rider: “She just went straight in their and rocked it!” she said elated after her successful ride.

The fourth member in the German team, Dorothee Schneider, came sixth with Sammy Davis Jr. (75.916). The pair performed a super test, until a rabbit suddenly hopped across the arena in the Deutsche Bank Stadium. Dorothee Schneider and Sammy Davis Jr. were concentrating so hard that they didn’t even notice it – although it actually crossed the diagonal that Sammy was just doing his flying changes à tempi on. A murmur spread through the crowd which unnerved Dorothee Schneider: “I simply didn’t know what was going on. I thought I must have took the wrong course? Had my horse lost the tail toupet it doesn’t have?” The confusion led to Sammy Davis Jr. making a mistake in the flying changes. Nevertheless, the rest of the test went very well.

USA take the lead in the Lambertz Nations Cup

The Prize of the Tesch Family was the first part of the Lambertz Nations Cup of the dressage riders. The second competition is the Grand Prix Spécial, the MEGGLE Prize. So, nothing is decided yet. One had actually counted on the German team celebrating a relaxed home victory despite Sönke Rothenberger having to withdraw because his horse Cosmo came down with an infection. Instead the guests from across the seas have taken the lead with a total interim score of 231.988, ahead of Germany with a score of 229.798 and Denmark on 223.106.

Not only the winner Laura Graves collected plenty of points for the USA, her team mate Kasey Perry-Glass, who came fifth with her Danish Diamond Hit son, Goerklintgaards Dublet, was also awarded 76.801 percent after a very harmonious ride. The US team is completed by Adrienne Lyle with Salvino (74.581 percent) and Steffen Peters with Rosamunde (71.351).

The team from Denmark, which currently lies in third place, comprises of Cathrine Dufour with Cassidy, Anna Zibrandtsen with Arlando (70.434), Anders Dahl with Selten HW (70.093) and Daniel Bachmann Andersen with Blue Hors Zack (74.177). 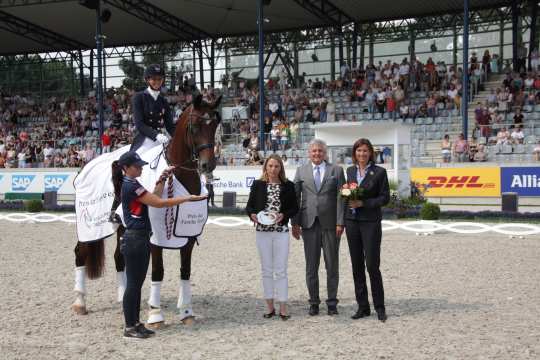 The winner is congratulated by Sabine and Siegward Tesch and Stefanie Peters, member of the ALRV advisory board.